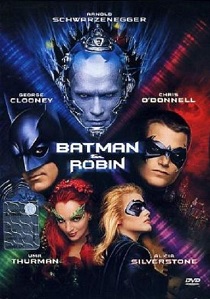 The most crime ridden city on the planet is being terrorised by Poison Ivy, a beautiful, but hate filled woman who can kill with a kiss and control deadly plants, and an ex-doctor who lost his wife and was turned into Mr. Freeze in a freak accident.

Mr. Freeze now has to wear an ice suit in order to stay alive, but has invented a gun that can freeze anything in seconds. To make the gun work, he must steal diamonds which also power his ice-suit. Just to top off the problems for Batman, when Alfred's niece turns up on the doorstep of the Wayne mansion, she is taken in and eventually ends up as Batgirl.

If the above plot sounds like it has been rushed, well it hasn't, its just that this film has no plot at all...Things just happen. I mean lets face it, why does the lovely Miss Silverstone have to turn herself into Batgirl? It's not something you would normally think about in her position. Thurman however can't be faulted, mind you this is because she just looks and acts so damn sexy that you'd forgive her anything.

As for Schwarzenegger, he just seems out of place playing a bad guy these days. In fact the last bad guy he played was in his first mainstream film "The Terminator". Clooney however is the best Batman to date and plays his part well.

The picture is quite good with rich colours and an above average bit rate, this means that even in dark scenes of which this film is mainly made up, they look good and are free from artifacting and outlining. This is all the more amazing, since this is one of the earliest region 2 DVD's.

Extras are deceiving, if you look at the back of the DVD it says that there are production notes and that's it. Well, this is true, but it has to be said that they are some of the most comprehensive you'll find, with pictures and text detailing items such as the vehicles used in the film and the costumes. One annoying thing is that the film seems to default to subtitles on, this means that you have to turn them off manually on your player.

In general this is an okay disk, the sound is excellent but the rest of the package is only okay. Certainly the film lacks any plot and is just a collection of fights, albeit very good ones. Buy it if you're a fan, or you've got the other films.

3D-BD
The grave course of events set in motion by Thanos that wiped out half the universe and fractured the Avengers ranks compels the remaining Avengers to take one final stand in Marvel Studios', Avengers ... END_OF_DOCUMENT_TOKEN_TO_BE_REPLACED
Latest ReviewsView