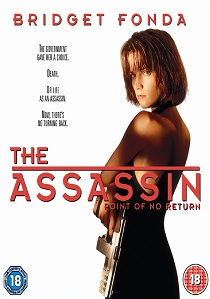 ReviewRomanceAdventure
Review Article Go back to homepage
A convicted cop murderer is sentenced to death by lethal injection. However, after the execution Maggie comes around to find that her execution has been staged in order for her to become a government assassin.
Bridget Fonda, Gabriel Byrne, Dermot Mulroney, Miguel Ferrer, Anne Bancroft, Olivia d'Abo, Richard Romanus, Harvey Keitel, Lorraine Toussaint
Action/Adventure, Romance
2
1 Hour 41 Minutes
Thank you for supporting DVD365.net when you order using the link(s) below.
Buy DVD
Story

When a gang of drug-addicts break into a chemist shop and attempt to steal drugs to fuel their habit, the police turn up and a shoot-out ensures. The police soon pick off the thieves leaving one female, Maggie, cowering in the corner still desperate for a fix. When a police officer approaches her to offer some assistance she shoots him dead in cold blood.

Maggie is sentenced to death by lethal injection and the punishment is soon carried out. However, she wakes up after the execution to find that her life has been spared for a more sinister purpose. She has been given a stark choice, train as a government assassin or next time the lethal injection will be for real.

After some arduous training she makes a amazing transformation from drug-addict to ruthless assassin. She is given a new identity and allowed to start a new life, but on the condition that she will always be on call for the government. However, as she begins her new life and settles down with her boyfriend the government starts calling with assignments.

The picture is bright and colourful with an average bit-rate throughout the film. However, it did tend to be grainy and washed out. It is not the best picture you'll see on DVD, but with it being such an early entry into the DVD market you can't expect too much from the encoding process.

The sound can only be classed as average. Although there's s a fair amount of activity in the rear channel, it is hardly very inventive with too much reliance on the soundtrack. There's a few LFE's, most noticeably during her test assignment and the exploding hotel, but nothing really stands out. The dialogue is well placed in the centre, but I thought that there was far too much information which would have been better placed in the other channels.

With this disc being a relative newcomer to the region two market it suffers from the usual lack of extras. This is especially annoying when you compare this to the region one release which had both full-screen and widescreen presentations along with production notes and a theatrical trailer.

This is a remake of Luc Besson's "La Femme Nikita" and, to be honest, the big bucks of Hollywood has failed to produce anything like a comparable remake. If you've seen the original then you should agree that the shear sexiness oozed by Anne Parillaud is truly missing here, plus Harvey Keitel as the "cleaner" is totally pathetic - I mean, who could beat Jean Reno in that role? You'd be better putting up with the French soundtrack and subtitles.