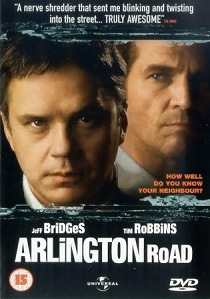 Review Article Go back to homepage
Michael Faraday and his son are still trying to come to terms with the death of his wife when they befriend a family across the road. Michael soon starts to get reservations about the Lang family, realising that they are not what they claim to be.
Jeff Bridges, Tim Robbins, Joan Cusack, Hope Davis, Robert Gossett, Mason Gamble, Spencer Treat Clark
Suspense/Thriller
1, 2, 3, 4, 5, 6
1 Hour 53 Minutes
Buy DVD
Story

Do you really know what your neighbours get up to behind closed doors, and we're not talking the bedroom here. The film concentrates on the American paranoia of terrorism, not from foreign countries, but from the various groups in the country with a grudge against the government.

Michael is a teacher and specialist in the study of American terrorism. He is still coming to terms after he lost his wife, an FBI agent, in a bungled investigation two years earlier. Coming home from work one night he finds one of the new neighbours children in the road covered in blood. Taking him to hospital he makes friends with the neighbours but soon learns that the boys injuries were caused by an explosion.

As he spends more and more time with the Lang family it becomes more evident that the new neighbours aren't quite what they seem. As his paranoia gets the better of him, he starts some detective work uncovering some dark secrets about the family next door. Working with a friend from the FBI he ultimately makes a startling discovery which results in a completely unexpected, and twisted, film ending.

The anamorphic transfer is good and the images are sharp and colours vibrant, just as a DVD should be. The film is mainly dialogue based, so there is not much use of the surround channels, and the dialogue is crisp and clear throughout the film. I thought the musical score was quite effective, although it didn't reach the rears, and the various explosions were certainly loud enough to loosen the plaster from the walls.

3D-BD
Following the global success of Godzilla and Kong: Skull Island comes the next chapter in the cinematic Monsterverse in Godzilla II: King of the Monsters, arriving on DVD, Blu-ray and 4K UHD 7th ... END_OF_DOCUMENT_TOKEN_TO_BE_REPLACED
Latest ReviewsView