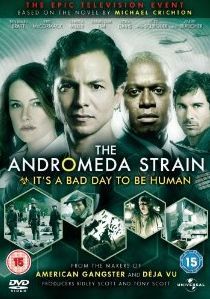 When a secret government satellite crash lands in Piedmont, Utah, two young adults out on a date decide to pick it up and take it back into town. However, they foolishly decide to open it and accidently release its deadly cargo - a virus so deadly that it kills in seconds, or drives people so mad they commit suicide. When the military finally track down their missing satellite and arrive in Piedmont they discover that, for the exception of the town drunk and a baby, the entire population of the town is dead. This sounds like a job for the Biohazard Containment Department. With the pathogen named codenamed Andromeda, mankind's hopes rest on a crack team of five scientists working deep underground in a top secret laboratory.

The team soon discover that this is no ordinary virus - it doesn't even contain any DNA and it could have extraterrestrial origins. To make matters worse, the virus continues to evolve, with the cells somehow managing to communicate with each other and warning of any new methods of destroying it. With the virus still present in the surrounding area - and infecting members of the national guard and local animals - the top brass in the military decide that the nuclear option is the only way to eradicate the virus before it infects the general population. However, in the nick of time, the scientists discover that the resultant energy and radiation would encourage the virus to mutate and grow at an exponential rate.

When the team finally discover how to defeat the virus, it becomes a dramatic race against time. As planes are dropping an anti-viral around the quarantined areas, the laboratory has become infected and the laboratory's auto-destruct sequence has began - and we all know what will happen to a continually mutating virus when the laboratory goes up in a cloud of smoke. So, with the fifteen minute countdown running out, the team not only have to disable the destruction mechanism, but contain the virus before it escapes the compound.

Originally shown over a number of nights in two parts, rather than shoe-horning three hours worth of viewing onto a single disc, and risking some potential hideous issues with picture compression in the process, The Andromeda Strain is contained on two discs. Whilst the number of discs does increase the price a little, the all important transfer comes out on top with an image which is free from outlining and pixelisation. Whilst there's no escaping the fact this is nothing more than a made for television release with some rather obvious CGI effects, there's no doubt that a future, and money spinning, DVD release was kept in mind. Never the less, whilst the colours are rich and varied with a good level of detail (and highlighting the poor special effects in the process) the image is a little on the soft side. But then again, most material from American television broadcasts are usually washed out side - even digital broadcasts.

Whilst the Dolby Digital 5.1 384 Kbps soundtrack lacks that little something that can make an average programme an excellent programme, it does at least manage to offer a fairly dynamic and involving soundtrack. With some interesting, albeit underutilised, use of the surround channels, the dialogue is kept firmly locked in the centre and front channels whilst there's a reasonable amount of stereo steerage in the front channels. Even the dramatic musical score helps to keep some of the tension going - even if it is occasionally a little too overbearing and distracting at times.

I'm always a little suspicious of the money making motives for a rapid DVD release of television mini-series, so it was nice to discover that some thought and effort had gone into the design of the menu. With an animated virus finding its way through the bloodstream (but only on the first disc for some bizarre reason) and spooky score, the menu system is pleasantly intuitive to use with a surprisingly good collection of extras. Extras wise, they are spread across the two discs with an audio commentary and making of featurettes.

The main extra has to be the Audio Commentary on both of the episodes with director Mikael Salomon, editor Scott Vickrey and executive producers David W Zucker and Tom Thayer. The only people suspiciously missing from the yack track are Ridley and Tony Scott. As a commentary track, even though it gets quite technical at times, it's a good one with plenty of information about their take on the original classic book and film. However, interesting or not, I only listened in at various points during the two parts as I don't think I could have put up with the best part of three hours of it.

The other feature on the first disc is the twenty six minute Making The Andromeda Strain featurette. Whilst Ridley Scott avoids the commentary track he does make a brief appearance here to explain why this remake was chosen. Detail wise, it's your classic Making Of featurette, with plenty of information on the locations and the special effects. There's even some clips for the classic film thrown in for good measure too. The featurette on the second disc is the fifteen minute Visual Effects Breakdown. With only a bit of spooky and/or dramatic music for company, this feature is simply a montage of the construction and use of the digital effects used in the film. Unfortunately, without any commentary of what is happening, it's a bit of a disappointment - even more so when I find the CGI effects used in programmes and films interesting.

Things are rounded off with a Photo and Design Gallery of over a hundred drawings and stills from the film. It's not the most interesting of galleries you'll see - especially with the amount of photographs you need to wade your way through, but I guess fans of the series will be interested to see some detail in the sets and ideas of the designers. It's just a pity that none of the promotional trailers were added. Still, you can't complain, as all of these extras add some good value to the release.

Based on the legendary Michael Crichton's classic sci-fi novel of the same name, brothers Ridley and Tony Scott version of The Andromeda Strain brings the story up to the present day with plenty of modern references and topical political comments - including quotes on the invasion of Iraq such as "I'm not invading another country based on no evidence or hearsay" to other current world events - such as energy and green issues. So when Crichton's book was first published in 1970, followed closely by Robert Wise's film in 1971, the story quickly captured the world's attention by focusing on a biological crisis instead of the then world-wide preoccupation with the nuclear arms race and the impending nuclear Armageddon.

Whilst the many references to North Korea and the Gulf region keep the story line ticking over, the usual round of flag waving tends to take the shine off so many scenes - causing me to slap my forehead and groan in the process. The rather overly hi-tech laboratory plus a government conspiracy theme also kept reminding me of a cross between CSI and The X-Files. Voice activated computers? I think I'd prefer a keyboard and mouse to a machine potentially misunderstanding your voice command and accidently unleashing something nasty.

I suspect that most present day fans of science fiction will find this release interesting and worthwhile looking at, especially for the rather good collection of extras which the television broadcast couldn't easily offer. However, for those who remember and enjoy the original book and film, you could be a little horrified by this rather tame, and unflattering, remake. So, depending on where you sit on the sci-fi fence, The Andromeda Strain is a bit of a hard one to call. If you watched and enjoyed the mini-series on television then this DVD release is a must own whilst die hard science fiction fans may want to proceed with caution. As for everyone else? Why not watch it after viewing the original film and then decide which version looks the more farfetched and dated? I think you'll be surprised...