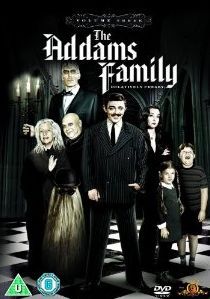 The Addams are back for the final time for yet more madness and mayhem. Brace yourself for more macabre mayhem, and monstrous madness - it's time, once again, to pay a call on the Addams Family, television's creepiest clan, as they wreak hilarious havoc on their unsuspecting victims. This time, love is in the air, and it seems that everyone - Pugsley, Ophelia, Uncle Fester, and even Lurch - is being bitten by the bug! Gomez, meanwhile, is burglarising houses in his sleep, and it's curtains for the new neighbours when Morticia tries her hand at decorating.

But just who are the Addams'? Well, for a start Gomez Adams the head of the house. He's an extremely wealthy man and takes great delight in losing money - the more the better. His wealth means that he is able to indulge his beautiful, yet ghoulish, wife Morticia's every desire, be it her love of poisonous plants, clipping the heads off roses or a candlelit dinner in the family graveyard. The pair are most definitely in love and whenever Morticia utters a word of French Gomez knees begin to knock.

Son Pugsley and daughter Wednesday are your typical brother and sister, and being typical I mean they are typical in their love of dangerous experiments, torture racks and electric chairs. Wednesday is also fascinated by death and is constantly trying to kill her brother. Her favourite toy is a guillotine and her headless Marie Antoinette doll. Uncle Fester is one of the stranger members of the family - not that they'd notice. Bald as a coot, he has the remarkable ability to illuminate a light bulb by placing it in his mouth. He also wouldn't look, or act, out of place in the local mental institute. Grandmama Addams is a witch who provides the family with an ever useful supply of pills, potions, spells and hexes. After all, you never know when that eye of newt will be needed for the next batch of love potion.

Then there's the seven foot tall man servant called Lurch. Looking remarkably like Frankenstein, he hardly ever speaks - only groaning or managing a "You rang?" when one of the family members pulls the bell in the form of a hangman's noose. That's not to say he's not of any use as he plays a mean harpsichord and organ and is more than happy to keep the children entertained. The final member of the family is "Thing". He's a disembodied hand that is usually on hand to help scan through the phone book, write letters or simply provide a soothing pat on the back when things aren't quite going to plan. But whilst they're all wacky and weird on the outside, on the inside they're all heart and they're living the American dream (albeit by their own rules).

The vaults of CBS must be well protected from the elements as, along with the previous releases in the series, the print quality is surprisingly good. Sure, with an aged print such as this there were always going to be a few problems with print damage and a general deterioration in image quality (which I'm sure a bit digital cleaning wizardry would have handled with ease) but the black levels and shadow detail are more than adequate. Not a bad effort, especially when you consider the state of some of the 70s and 80s television series currently available on DVD - they're enough to make you burn your flares and tank tops in anger!

As per the previous releases, the soundtrack is provided as a rather simple192 Kbps 2.0 mono soundtrack. Fortunately, the dialogue is crisp and clear whilst the audio score and sound effects are just as effective - even if you do need to crank up the volume to get the full benefit. Unfortunately, things are spoilt by the continual presence of that awful canned laughter - it's just a pity nobody has managed to write some computer software to remove this annoying blot on the landscape of classic television comedy.

Before we get to the menu we have to endure the annoying piracy spiel followed by various trailers for other Twentieth Century Fox titles. Once those are over and done with each of the three discs contains a nice menu introduction followed by a scored, but static, menu containing the theme tune. The various episodes can either be individually selected or played in one sitting. The special features are also housed on their own menus across the three disc set.

People familiar with the series will know that Cousin Itt just talks in high pitched squeaks whist Thing is - well - just a lone severed hand. Given this remarkable information you'd expect there'd be a spot the communication problems. Still, that doesn't stop them appearing in the bizarre, and totally pointless, Select Scene commentary for the Morticia's Dilemma and Lurch's Little Helper episodes. Spread across the three discs, these "features" only last for a minute. Still, at least there's some subtitles scrolling across the screen (albeit at a rapid rate) to help decipher what he's wittering on about.

The second disc contains an Audio Commentary for the Morticia, The Decorator episode from The Addams Chronicles author Stephen Cox. Back with yet another interesting commentary, Stephen is on hand to provide a near constant stream of fascinating facts about the actors and the programme. There's even subtitles for the commentary track. Things are rounded off on the third disc with some Tombstone Trivia on the Cat Addams episode.

Based on Charles Addams' single panel cartoons that originally ran in The New Yorker magazine, the Addams household featured a grisly array of inhabitants. What makes it all the more fascinating is that it transferred to television so well. Who would have thought that the Americans would take to it so well? Perhaps its success was because it still managed to portray those all important American values - even if it was in a much more surreal and completely bizarre way. And let's face it, a bit of flag waving and mom's apple pie never did the Americans any harm.

Given that fans of the series will already own the first two boxsets it's fair to expect that this third volume will also be added to their collection. However, I'm also left thinking just why the entire series wasn't released in one whole go in the first place. The cynic in me would suggest that by splitting the complete series into three separate volumes more money could be extracted from the fans (after all, a RRP of £29.99 for three discs is a little on the pricey side - especially for an old programme such as this) but, then again, I'm sure a more reasonably priced complete set will become available in the not too distant future.

Cynicism aside, this third and final boxset is the perfect way to end a series with comedy just as good as the others in the collection. The majority of the cast may now have moved onto that great and dusty house in the sky but, unlike our search for immortality, their antics will live on for many years to come. Highly recommended - and released just in time for Halloween too!