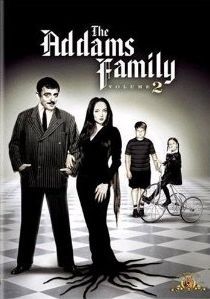 The Addams Family are not your typical family. In fact you could probably class them as your typically weird family - you know, those strange people who live down your road that have a rusting car in the drive and that you hardly ever see, let alone speak too. You see, the Addams' take great delight in being the complete opposite to what most people would class as "normal". The more ghoulish, mysterious or spooky and the Addams Family will either sponsor it or be part of it. Consider it Halloween every day and night.

The family is made up of Gomez, Morticia, Pugsley, Wednesday, Uncle Fester, Grandmama and their ever trusty, and seven foot, butler called Lurch. Gomez Adams the head of the house. He's an extremely wealthy man and takes great delight in losing money. His wealth means that he is able to indulge his beautiful, yet ghoulish, wife Morticia's every desire, be it her love of poisonous plants, clipping the heads off roses or a candlelit dinner in the family graveyard.

Son Pugsley and daughter Wednesday are your typical brother and sister, and being typical I mean they are typical in their love of dangerous experiments, torture racks and electric chairs. Wednesday is also fascinated by death and is constantly trying to kill her brother. Her favourite toy is a guillotine and her headless Marie Antoinette doll. Uncle Fester is one of the stranger members of the family - not that they'd notice. Bald as a coot, he has the remarkable ability to illuminate a light bulb by placing it in his mouth. He also wouldn't look, or act, out of place in the local mental institute. Grandmama Addams is a witch who provides the family with an ever useful supply of pills, potions, spells and hexes. After all, you never know when that eye of newt will be needed for the next batch of love potion.

The wacky family is rounded off with the seven foot tall man servant called Lurch. Looking remarkably like Frankenstein, he hardly ever speaks - only groaning or managing a "You rang?" when one of the family members pulls the bell in the form of a hangman's noose. That's not to say he's not of any use as he plays a mean harpsichord and organ and is more than happy to keep the children entertained. The final member of the family is "Thing". He's a disembodied hand that is usually on hand to help scan through the phone book, write letters or simply provide a soothing pat on the back when things aren't quite going to plan. But whilst they're all wacky and weird on the outside, on the inside they're all heart and they're living the American dream (albeit by their own rules).

Given the age of the series, and the fact it was filmed entirely in black and white, I wasn't really sure what to expect from the picture quality. However, the vaults of CBS must be well protected, as the print quality here is quite remarkable. With not much to do in the way of challenging video compression or colour processing, the grey scale and shadow detail is spot on and exhibits few signs of artifacting - although there can be a fair amount of print damage at times. Never the less, it's all quite remarkable, especially when you consider the state of some of the 70s and 80s television series that find their way to DVD. It's certainly an excellent preservation job for future generations of fans of the series.

Since the series was filmed nearly fifty years ago, the idea of stereo was still being tinkered with in some mad scientist's laboratory - and even then they certainly wouldn't have ever considered a stereo television broadcast. It would have been so outrageous that even Uncle Fester would have thought you'd be mad. So, rather naturally, the sound is provided as a mere 192 Kbps 2.0 simple mono soundtrack. Fortunately, the dialogue is crisp and clear whilst the audio score and sound effects are just as effective. However, things are spoilt by the ever awful presence of canned laughter. The person who dreamt that idea up really does need to be tied up and severely lashed in the Addams' dungeon.

Before we get to the menu we have to endure the usual, and increasingly annoying, piracy spiel, whilst the three discs contain various trailers for other Twentieth Century Fox titles. Once those are over and done with, each disc contains a nice menu introduction followed by a scored, but static, menu containing that ever so famous theme tune (although it does start to grate after a few loops!). The various episodes can either be individually selected or played in one sitting. The special features are also housed on their own menu - of which some of far, far better than others.

The first of the three discs contains the rather bizarre Select Scene commentary from Thing and Cousin Itt for the Thing is Missing and My Son, My Chimp episodes. They also pop up on the Cousin Itt and the Vocational Councillor and My Fair Cousin Itt episodes on disc two. Now, people familiar with the series will know that Cousin Itt just talks in high pitched squeaks whist Thing is just a hand. Now spot the communication problems - even with subtitles. Totally bizarre, totally pointless, but never the less, totally Addams Family.

The second disc also contains some proper Audio Commentaries that you can actually understand. The author of The Addams Chronicles provides the yack track for the Mortica Meets Royalty episode whilst there's some Tombstone Trivia on the Mortica's Romance (Part I) episode. The third disc also contains the thirteen minute Mad About the Addams. With plenty of clips and photographs, plus interviews with fans and others observers, including a rather old looking John Astin, it's a rather good and nostalgic look back at this groundbreaking comedy series. Next up is the Guest Star Séance featurette where ten guest stars from the show are resurrected from the dead (or series film vault) with a little bit of information about them. It's a bit tedious, but never the less fairly interesting if you can stick it out.

They don't make them like they use to. Along with The Munsters this truly was a piece of classic television programming from 1960's America, and it's great to finally have the complete set of episodes for both series available on DVD. Although I'm far too young to remember their original television broadcasts, I do remember them being shown on British television (I think on Channel Four) and they were must see views. Darker than The Munsters, The Addams Family still managed to contain those all important American values, even if it was in a much more surreal, morbid and black.

Based on Charles Addams' single panel cartoons that originally ran in The New Yorker magazine, the Addams household featured a grisly array of inhabitants. What makes it all the more fascinating is that it transferred to television so well. Who would have thought that the Americans would take to it so well? The Addams Family was launched by ABC six weeks before CBS unveiled The Munsters. As such, both of these series will always be compared with each other - even this review can't help but make multiple comparisons. But the big unanswered question is - which series is best?

Personally, I'd have to go with The Addams Family. Not only is it superbly dark, but the two theatrical outings - along with the superbly cast characters of the late Raúl Juliá, Angelica Houston, Christopher Lloyd and Christina Ricci - really keep the various stories fresh in the mind. They probably even managed to attract a new generation of fans. Whilst there's no doubting that the series does contain some poor episodes (but which series doesn't contain those) and the canned laughter can border on the grating, it's a series that has matured nicely over time. It's just a pity the those dollar signs meant that a truly awful The New Addams Family was also spawned after the success of the films.

Given that fans of the series will already own the first half of the boxset, it goes without saying that this second half is just as good - if not better - and the perfect companion to a near perfect television series. It's also an interesting foil to our younger generation who will have only been aware of the more recent theatrical outings that go to prove that black humour like this ages very well indeed. Highly recommended.