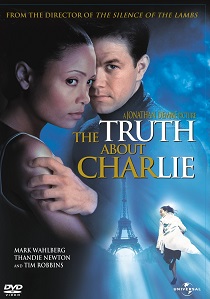 Whilst contemplating putting an end to her marriage to husband Charlie, Regina Lambert decides to take a short break in Martinique. On returning to Paris she bumps into a Joshua Peters, the same man she innocently met on the beach in Martinique, and when her husband fails to pick her up at the airport she accepts a lift from Joshua back to her apartment. But on entering her apartment she finds it completely empty with no furniture, pictures or even curtains. But there's even worse to come when the police arrive to inform her that Charlie has not only been murdered but both their bank accounts have been completely emptied.

Finding herself doing the detective work, Regina soon becomes immersed in the suspicious circumstances that surround her husband's death and it soon transpires that Charlie was not the simple art dealer she thought she'd married. Regina has also become the target of a ruthless gang who are demanding the return of $6 million dollars which they claim Charlie has. Confused by these demands and their threats she is rejoined by her holiday acquaintance and top US government Agent Mr. Bartholomew who informs her that Charlie was leading a dark and dangerous double life.

With the help of the agent Bartholomew, Reggie uncovers even more about her husband's mysterious past and the gang which is always on her tail. But when she uncovers some alarming information about Charlie's violent past she discovers that Joshua is not the person he claims to be. To make matters worse, Reggie is also under investigation by Commandant Dominique who is determined to prove that she is responsible for her husbands death.

Although the picture is crisp and clear throughout it seems to lack any real vibrancy in its range of colours. Whilst this is most likely to be deliberate in the rainy back streets and dark interiors of Paris, the opening scenes in Martinique are just as dull. In fact, it could have been filmed on a cold and wet Blackpool day for I know. Fortunately, the picture manages to be free from any signs of outlining and artifacting and the print is free from dust scratches and other forms of picture imperfections. On the plus side, The Truth About Charlie contains some extremely interesting and imaginative cinematography and I got the impression that director Johnathan Demme was heavily influenced by the likes of Alfred Hitchcock.

The soundtrack is reasonably dynamic with some clear and precise dialogue in the centre channel, although I failed to notice any use of the LFE channel. There is the occasional use of the surround channel for ambient effects, but it tended to be rather limited and only really used by the musical score However, with it being a dialogue based film, with plenty of strange French accents to concentrate on, this wasn't too much of a problem. In fact, if anything, it was more of a bonus.

The menu system is pleasantly animated with various cut scenes from the film whilst being accompanied by the rather catchy theme music. As the for extras, well you'll be searching for an awful long time because there isn't a single one, not even the filler to end all fillers - the theatrical trailer. And in today's firmly established DVD market I certainly don't count "Scene access" as an extra. Quite how this is the case astounds me as you would have thought that the distributors would have done everything in their power to give this title, which is essentially a low key back catalogue title, more prominence and value for money. But perhaps I've just hit the nail on the head and it was decided to release it at a minimum production cost.

The Truth About Charlie is a remake of the classic 1963 thriller movie Charade which starred Carey Grant and Audrey Hepburn. It is not a line by line remake but as with Ocean's Eleven and The Thomas Crown Affair it's more of a modern take on the original movie plot. However, in this case would have to question whether this remake was really necessary, especially with the truly awful acting of Thandie Newton and a rather uninterested looking Mark Wahlberg. A match for the likes of Grant and Hepburn? I think not.

If you can put the thorny issue of Charade aside, which shouldn't be too much of a problem for those who've never seen it, the film still manages to be decent enough thriller with more double crosses than a noughts and crosses convention. However, this can be a bit of a problem when the plot twists become so frequent that the planned element of surprise is lost as you become more and more suspicious of each characters motives.

The Truth About Charlie is a strange film indeed. I certainly don't remember seeing it advertised at the cinema and can only guess that it headed straight for the lofty heights of the direct to video market. And to be honest, I can see why it did. Although it has some quirky, albeit rather interesting, cinematography and the Hollywood regulars of Mark Wahlberg and Tim Robbins there's still something that stops it all gelling together as it really should. And in my opinion that one thing is Thandie Newton. There's no doubting that she is a bit of a stunner in the looks department and her performance in Mission Impossible II promised great things, but her awful and unconvincing acting simply makes her the weakest link. She was definitely the wrong choice for the role in this film and as a result it takes the shine off what should have been a rather cracking thriller.

If you put all this altogether with the complete lack of extras it makes a hard case for recommending it for a purchase. This is all the more the case when you consider that the American region one edition comes with the original film, an audio commentary, deleted scenes and a making of featurette. A missed opportunity indeed.