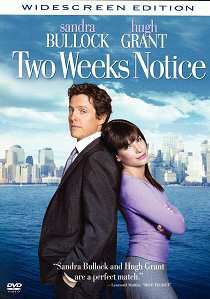 George Wade is one half of Wade Enterprises, a billionaire high profile New York real estate developer who doesn't really care for the old buildings which stand in the way of progress, and a nice large fat profit. Naturally, this stance tends to attract the more vocal members of the public who want their historical landmarks preserved for the future generations.

Lucy Kelson is a Harvard law graduate who's gone green and is one such vocal opponent to everything that the Wade Corporation does. When Lucy isn't on the phone to her distant whale protecting boyfriend she's out protesting at various building sites, getting arrested and then being bailed by her parents. However, when Lucy discovers that Wade Enterprises is going to pull down an historic Brooklyn recreational centre she decides to confront George Wade face to face.

George is a bit of a ladies man and as a result of his playboy ways is in the process of employing a new chief councillor. Although he's been told to employ a man, and preferably someone from Harvard, George is determined to continue annoying his elder brother and father, even though he died ten years ago. When Lucy confronts George outside of his offices he soon discovers that she matches all of his needs - she's Harvard educated and most of all she's pretty. On the loosing end of a very persuasive argument Lucy soon finds herself in a highly paid and influential job at Wade Enterprises. In return George promises not to pull down the recreational centre.

On her first day of work Lucy quickly discovers that her Harvard law degree isn't going to be put too much use as she ends up spending most of her time making mundane decisions for her boss, including selecting personal stationary and mattresses. Lucy puts up with this imposition for months but the final straw comes when George rings Lucy in an apparent emergency, causing her to leave in the middle of a wedding ceremony. Dropping everything she rushes back to his hotel only to discover that he only wanted help picking out a shirt. Infuriated, she tenders her resignation and gives her two weeks notice.

However, George has no intention of accepting her resignation and even goes to the extent of contacting every law firm in the city to prevent them hiring her. Lucy is left with no other choice but attempt to get her self sacked by arriving late or upsetting the Wade Corporation. Despite her best efforts, George is still having none of it so they are forced to come to a mutual arrangement - Lucy must find a replacement councillor before she can leave. Trouble is, George and Lucy have been together so long that they failed to realise that they were made for each other.

The picture is of a reasonable quality and definition with no signs of outlining or artifacting and an average bit-rate throughout. However, there tends to be too much contrast, especially during the daylight scenes, and the picture has a tendency to be a little grainy at times. It's actually rather a bit of a disappointment and something that is not really expected from the likes of Warner. It has a definite "low budget" look to it.

For this genre of film you shouldn't be really expecting anything too special from the sound department, and indeed there is very little to get excited about. Mind you, the soundtrack is so bland you may as well save yourself the electricity and not bother turning on your surround system. The surround channels remain virtually silent throughout the film and there's very little in the way of stereo. The only redeeming feature is the easily digestible dialogue in the centre channel.

The menu system is pleasantly animated and scored with a number of scenes playing in the background and quotes from the film uttered by the cast members. It's all simple, but highly effective. However, dwell too long on the menu and the film will start and your admiration of the menu will be short lived.

The main redeeming features of this disc are the extras, with the audio commentary being of particular interest. Both Hugh Grant and Sandra Bullock provide an audio commentary along with the director - and an interesting one it is too. Both actors appear to give the illusion that they get along well, but listen to the commentary and they constantly take little bites out of each other, be it Sandra's walk or Hugh pronunciation of words.

Another good, but particular annoying feature, is the "Two Bleeps Notice" outtakes section. Whilst outtakes and general on set antics can be funny and a worthy look in, this feature has to be enabled before the film is started. The outtakes can then only be accessed when a heart symbol appears on the screen for a particular scene. Whilst this is a novel approach, it isn't half annoying when you just fancy viewing the outtakes without having to watch the entire film. Perhaps there's an Easter egg in there somewhere to allow you to do so?

The extras also include a number of deleted scenes, a behind the scenes look at the film and a theatrical trailer. All in all the extras add value to package and go some way to making up for the lacking picture and sound.

I don't normally go in for these romantic comedies, but there is something about Two Weeks Notice which allowed me to sit and watch the film without requiring a blubbering female sat beside me (not that there's any blubbering to be had, but you know women). May be it's the fact I like Sandra Bullock (which male doesn't?) and perhaps it's because I liked Hugh Grant in About the Boy, but whatever it is, this film is a refreshing look at the good old tried and tested romantic comedy formula. The two roles are filled perfectly by their respective actors; in fact you couldn't really fill their characters with any other actors.

Two Weeks Notice is a funny, touching and highly entertaining film. It's sure to be enjoyed even by the most hard faced of cynic.

Special Features
Related Articles
Paddington 2, A Very English Scandal, Lair of the White Worm, Paddington 2, Florence Foster Jenkins, The Man from U.N.C.L.E., The Rewrite, The Pirates! In An Adventure With Scientists, Did You Hear About the Morgans?, About a Boy, Bridget Jone's Diary, Bridget Jones: The Edge of Reason, Small Time Crooks, The Gentlemen, The Undoing, Mosley: It's Complicated
Love on a Branch Line, The Witness for the Prosecution, Yes, Prime Minister
Our Brand is Crisis, Minions, Gravity: Two-Disc Special Edition, Gravity, The Heat, Extremely Loud and Incredibly Close, The Blind Side, All About Steve, The Proposal, Premonition, Infamous, 28 Days, Demolition Man, Forces of Nature, Miss Congeniality, Practical Magic, Speed: Special Edition, Ocean's 8, Speed
Bored To Death: Season 2, Bored to Death: Series 1, Choke, Miss Congeniality
The Leisure Seeker
Deliver Us From Evil
Comments
RecommendedView