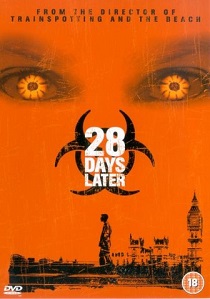 When a group of animal rights protestors break into an English research laboratory and start freeing the caged monkeys they fail to realise that they are releasing something far, far deadlier than a number of banana loving primates. Unknown to them the monkeys have been exposed to an experimental virus which causes the infected to enter a permanent and psychopathic state of rage and when a released monkey attacks one of the protestors it triggers an outbreak of the virus which quickly overcomes the country.

Whilst the chaos and destruction takes place a man lies in a coma in a London hospital. Jim is a cycle courier in London and he'd previously lost an argument with a truck whilst on a delivery. Awaking from his coma he finds that not only is he the only person in the ward, he's the only person in the hospital. Venturing onto the streets of London he is bewildered to discover that the streets are also devoid of any signs of life and his desperate calls go unanswered. He is totally unaware of the events which caused the desolation.

Baffled by what he sees, Jim walks around the city trying to find any signs of life, but when the enters a church he's quickly set upon by one of the infected. He's finally met some of the new locals. Fleeing the church he is rescued by Selena, one of the few remaining uninfected people left, and they join up with Frank and his daughter Hannah. When the group pick up a radio message from Manchester reporting that a solution to the infection has been found they pack what belongings they have, stock up on food and petrol and head for Manchester and their salvation. Trouble is, they've still got to get there and no body is actually sure what awaits them.

The picture is a bit of a strange bag and is entirely the result of Danny Boyles use of low-resolution digital cameras. The result is a bright and reasonably detailed picture, yet devoid of any real colour definition or real sharpness. However, it still manages to provide the gritty results which he no doubt desired in the first place. The bit-rate remains above average throughout the film and there are no signs of any artifacting or outlining. It's not a brilliant picture, but I think it portrays just what the director intended.

Knowing that this film was made on a tight budget I wasn't really expecting anything from the sound department. However, I was pleasantly surprised by the dynamic and involving soundtrack. There were plenty of ambient effects in the surround channel and the dialogue was clearly and easily audible in the centre channel. Overall, it's very good and a big plus point.

The menu system is pleasantly animated and scored and overall quite effective. There's plenty of sub-menus to explore and they to are well designed and presented. The collection of extras is equally impressive and they certainly add value to the overall package. The main highlight would have to be directors commentary track which reveals a few interesting facts about the films production. There's also a number of deleted scenes, an alternate ending and a behind the scenes making of featurette which contains a number of interviews with the cast. There's also an interesting set of galleries with optional audio commentaries and the usual set of teaser and theatrical trailers.

There has been plenty of mixed feeling about this film. Some praise it, like Empire magazine who enthused about it being "the best British horror film for 30 years", and others slagged it off for being a rip off of Resident Evil and Dawn of the Dead. Having missed the film at the cinema I decided to keep an open mind, especially considering that the film managed to turn a profit. After watching 28 Days Later I would have to agree somewhat with both camps.

On one side there's the fact that it is one of the few British films which, part funded by a lottery grant, managed to return a profit. Then there is the excellent locations and scenery. After all, just how do you manage to film in a deserted London and empty motorways? Have you seen London and the British motorway system recently? Mind you, judging by the height of the morning sun I expect that director Danny Boyle was helped by some very early shooting on a Sunday morning and a nice policeman with a road closed sign. Either that, or London's congestion charging was a little too effective!

On the other side, there are the complaints that the film is a rip off of Resident Evil. Whilst there is certainly a degree of this, I'd have to say that there is influence of more than one film here, with the majority being The Day of the Triffids (Just when are the BBC going to release their version on DVD?). I also thought that there was a bit of a subconscious nod to Dawn of the Dead, especially when the group did a little bit of extra shopping in the supermarket. Mind you, Resident Evil did appear after both of these films, so who's ripping off who?

Overall I'd have to say that the film was a big disappointment and that hype certainly reigned king. Some of the acting was diabolical, the dialogue was gratingly cheesy (although this was most likely deliberate) and the special effects were laughable - essentially amounting to a couple of bottles of tomato ketchup. But I guess that's all part of the films genre, after all Dawn of the Dead was no mega budget flick whilst Resident Evil had just awful CGI effects.

Unfortunately, the hype over this film led to me expect too much and as a result I was bitterly disappointed with the results. However, others may feel differently and the debate could go on forever.