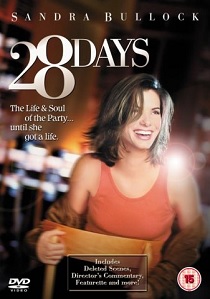 Gwen likes a drink, or three, and spends many a waking morning with her boyfriend Jasper just wondering what the heck they did the previous night. A party is just not a party without Gwen. One morning she and Jasper awake, as usual, with a hangover and they realise that they're due at Gwen sisters wedding. The pair franticly dress and, just for good measure, top up the previous evenings festivities with a few shots from a bottle.

Fuelled on alcohol and high spirits the pair set about the reception with their usual lack of restraint resulting in Gwen knocking over the wedding cake. Determined to find a replacement Gwen staggers out of the reception, steals a limousine and heads off down the road. Naturally, in her alcohol fuelled state she soon looses control of the car and smashes into a house. Fortunately, she didn't hurt anyone but finds herself in front of the courts and sentenced to 28 days in rehab.

Refusing to accept that she has a problem she tries to prove that she does not belong and refuses to obey the daily rules and rituals she is faced with. It's only through the friendships she forms with the other patients and her counsellor that she slowly begins to realise that there may be more to life than being the life and soul of the party.

The picture is bright with some excellent colour tones and plenty of detail. It has an above average bit-rate throughout the film an exhibits no signs of artifacting, outlining or picture noise. It is yet another excellent effort from Columbia Tri-Star.

The sound is above average with the occasional but effective use of the surround channels, especially during the parties and flashbacks. However, by the nature of this film most of the action take place in the centre channel and it is here the dialogue remains fixed throughout the duration of the film. I also really enjoy any film which includes the Dolby fanfare at the beginning as it gives you a quick tease of what the sound format can really do.

The menu is nicely presented and scored, although I found that the navigation process what a little haphazard. There are plenty of extras keep you happy including an interesting featurette showing, and hopefully not just for the benefit of the cameras, just how nice Sandra Bullock is.

One of the rehab patients is totally obsessed by the soap "Santa Cruz" and an episode has been included on the disc. I couldn't actually work out whether this was a spoof as the acting, and for that matter the plot, was absolutely awful! The "Guitar Guy" section is also worth checking out.

Although this film is primarily a drama, and one which portraits the problems of drug and alcohol addicts with respect, there are still plenty of moments to bring a smile to your face. Sandra is on top form, possibly her best outing to date, and along with Alan Tudyk, who plays Gerhardt, really makes for some extremely enjoyable entertainment on what is a sensitive subject.

The way the matter is handled is certainly a credit to director Betty Thomas. It is just a great pity that this film was missed at the cinema and video rental. However, now is the time to own what will definitely be a repeat viewing disc.