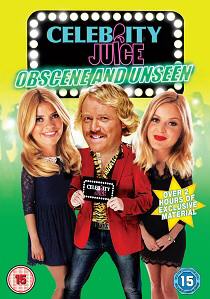 Released on DVD on 4th November 2013, courtesy of 2entertain, the exclusive Celebrity Juice - Obscene and Unseen DVD features over two hours worth of unseen moments from the ever popular comedy panel show, hosted by the inimitable Keith Lemon, alongside team captains Holly Willoughby, Fearne Cotton and Kelly Brook. Not only does the DVD show a wealth of material, some of which was considered far too saucy for TV, but also includes all the very best bits from Celebrity Juice Series 7, 8 and 9.

The DVD includes favourite games like Mask of Sorrow, Shouting One Out and The Tickle Monster and loads of new ones that have never been seen before. Guest appearances include favourite dingbats, Joey Essex and Helen Flanagan, Northern funny-men like Jason Manford, Chris Ramsey and Johnny Vegas and Olympic gold medallists Mo Farah, Jessica Ennis and Greg Rutherford. TV legends who guest on the show include Phillip Schofield and Jonathan Ross, while the biggest names in pop also appear including The Wanted, The Saturdays, Olly Murs, McFly, JLS, Conor Maynard and Rizzle Kicks.

HotUHD
StudioCanal is thrilled to announce that the iconic cult classic, Highlander, is being released to own on 4K UHD for the very first time 31st October 2022 with brand-new artwork from celebrated artist Matt Ferguson. END_OF_DOCUMENT_TOKEN_TO_BE_REPLACED
Top PicksView