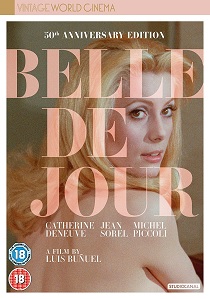 StudioCanal is proud to announce the release of the newly restored 4k version of Luis Buñuel's highly celebrated exploration of female desire, Belle De Jour. Starring Catherine Deneuve, Jean Sorel and Michel Piccoli, this groundbreaking surrealist film was Buñuel's most successful of his career and won the Golden Lion at the Venice Film Festival in 1967.

Belle De Jour: The 50th Anniversary Edition will be released on DVD, Blu-Ray and Digital download on 2nd October 2017 complete with brand new extras material and 6 exclusive Art cards. This release follows the premiere of the new restoration at the Cannes Film Festival earlier in May and a nationwide theatrical release of the film by Park Circus from September 8. To accompany the reissue and to celebrate work of the Spanish surrealist director loved by critics and cineastes alike, Buñuel - The Essential Collection, a boxset of 7 of the director's most significant films, will be released on October 23. Complete with new extras for each film, the boxset will include: Belle De Jour: The 50th Anniversary Edition, Tristana, Diary Of A Chambermaid, The Discreet Charm Of The Bourgeoisie, Phantom Of Liberty, The Milky Way and That Obscure Object Of Desire.

Séverine (Catherine Deneuve, The Umbrellas of Cherbourg, Dancer in the Dark), the very reserved wife of Pierre (Jean Sorel, The Day of the Jackal), is prone to masochistic fantasies which reveal her sexual frustration. Driven by curiosity, she secretly pays a visit to a brothel and, unknown to her husband, soon becomes "Beauty of the Day", the third girl in Madame Anaïs' discreet house of ill-repute. Seemingly having found an inner peace through the satisfaction of her clients' desires, things soon turn sour when Marcel (Michel Piccoli, Le Doulos), a loutish regular visitor to the bordello, insists on having Séverine all to himself. Panic-stricken, Séverine quits her dangerous day job but is it too late?

The Restoration StudioCanal, in partnership with the CNC, the French Cinémathèque, the Franco- American Cultural Fund and the House of Yves Saint Laurent took the scan from the original negative and produced the 4K restoration of Belle De Jour. The work has been handled by the French laboratory HIVENTY.

HotDVDBDUHD
An action thriller unlike any other, a young getaway driver relies on the beat of his personal soundtrack to be the best in the game in Baby Driver, the newest explosion of genre-crossing excitement from writer-director Edgar Wright, released on 4K Ultra HD, Blu-ray and DVD ... END_OF_DOCUMENT_TOKEN_TO_BE_REPLACED
Top PicksView