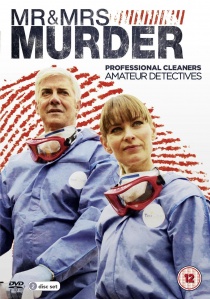 Created by and starring renowned Aussie actor and comedian Shaun Micallef (Talkin' 'Bout Your Generation) and Kat Stewart (Offspring), this thrilling series follows the adventures of a married couple who run an industrial cleaning business whilst solving the most baffling murder mysteries.

Described by the Sydney Morning Herald as 'a modern take on screwball crime-comedy', crime scene cleaners Charlie (Micallef) and Nicola (Stewart) Buchanan are a fun loving and flirtatious couple whose unique quirks and talents lead them to unpick puzzling crimes. Add Charlie's vice-like grasp of facts and figures to Nicola's deep sense of justice, observational skills and human empathy and you have the best crime-cracking couple since Moonlighting. The two inevitably find evidence and other clues associated with the investigations and are often able to close cases the cops can't.

Working alongside them is Detective Peter Vinetti (Jonny Pasvolsky - Mortdecai) who needs them more than they know, Nicola's niece, the young and increasingly less naïve Jess Chalmers (Lucy Honigman - The Ex-PM) and their good friends Alan and Janine (Ben Geurens - Neighbours and Georgia Naidu - The Boys are Back) who appear just at ease reassembling an AK-47 or baking a sponge cake.

Charlie and Nicola pursue clever killers and misguided murderers in the unexpected worlds of musical theatre, the seaside elite, high fashion, modern art and more as they earn themselves a well-deserved reputation as Mr & Mrs Murder.

This 13-part truly enjoyable series will be released as a two-disc set on 3rd August 2015 complete with a slew of fantastic special features.