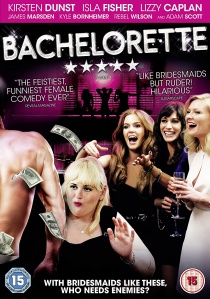 Welcome winter in with the ridiculously raunchy release which critics are calling 'the feistiest funniest female comedy ever'! Bachelorette, released on DVD and Blu-ray on 7th October 2013 courtesy of Lionsgate UK, follows the hilarious antics of three naughty bridesmaids the night before their friend's wedding.

It's a nice day for a white wedding, but first she's got to survive the bachelorette party! Lovely Becky (Rebel Wilson, Bridesmaids) is set to marry her handsome sweetheart, Dale (Hayes MacArthur, Life As We Know It), so the bitter remaining members of her high school clique reunite for one last blowout in New York.

Regan (Kirsten Dunst, Spider-man 2) is an overachieving, uber-Maid of Honour who's secretly smarting over the fact that she's not the first to marry, while Gena (Lizzy Caplan, Mean Girls) is a whip-smart sarcastic who's actually a closet romantic, and Katie (Isla Fisher, The Great Gatsby) is a ditzy beauty who loves the good life. But when Becky insists on keeping the bachelorette party tame, the three frisky bridesmaids proceed with an after-hours celebration of their own and find much more than they bargained for.

Bachelorette is the perfect gift for the girls this Christmas, taking you on a wild ride through New York night life, which will leave you feeling grateful you don't have bridesmaids like these!

HotDVDBD3D-BDUHD
The producers of Godzilla reimagine the origins of one the most powerful monster myths of all in Kong: Skull Island, released on DVD, Blu-ray, 3D Blu-ray and UHD on 24th July 2017 from Warner Home Video. END_OF_DOCUMENT_TOKEN_TO_BE_REPLACED
Hot PicksView