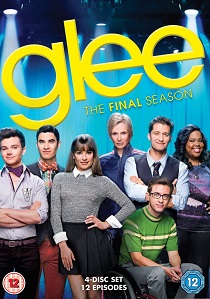 Having been part of our lives for the six harmonious years, the time has come for The New Directions to face the final curtain when Glee: Season Six is released on 24th August 2015 by Twentieth Century Fox Home Entertainment.

Season six begins with Rachel (Lea Michelle) humiliated, her dreams of stardom in tatters, heading back to Lima for some home comforts and reassurance from Mr. Schuester (Matthew Morrison). but she's not the only one migrating back to William McKinley High School. Some friendly faces including Kurt (Chris Colfer) and Sam (Chord Overstreet) have also returned to the birthplace of The New Directions, along with season regulars Artie (Kevin McHale) and Blaine (Darren Criss). Back home things come to a head with proposals, break-ups and a desperate attempt to restore the arts programs that archrival Sue Sylvester (Jane Lynch) had banished from McKinley High.

After seven hundred songs and six gleeful years, Season Six on DVD offers Gleeks the chance to revisit the cultural phenomenon from its origins with special features Glee: The Final Curtain and Looking Back Video Yearbook. The box-set also includes the classic Glee Musical Jukebox.

Join the Glee Club for their final chorus when Glee: Season Six comes to DVD on 24th August 2015.

HotDVDBD3D-BDUHD
The grave course of events set in motion by Thanos that wiped out half the universe and fractured the Avengers ranks compels the remaining Avengers to take one final stand in Marvel Studios', Avengers: Endgame, released on DVD, Blu-ray, 3D Blu-ray and 4K-UHD 2nd September ... END_OF_DOCUMENT_TOKEN_TO_BE_REPLACED
Top PicksView