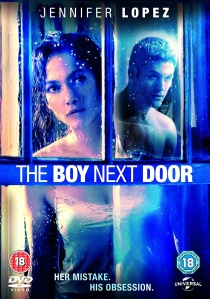 A momentary lapse of judgement leads to a dangerous obsession in the provocative thriller The Box Next Door starring Jennifer Lopez (Maid in Manhattan, Monster-in-Law, The Wedding Planner). Available on Blu-ray and DVD on 6th July 2015 from Universal Pictures (UK), The Boy Next Door takes audiences behind the scenes with exclusive bonus content including deleted scenes, a filmmaker commentary and more.

Lopez stars as Claire Peterson, a high-school literature teacher struggling to get back in the dating game after separating from her cheating husband while raising her adolescent son. When handsome and charismatic 19-year-old Noah (Ryan Guzman, Step Up series, Pretty Little Liars) moves in next door, Claire has a moment of weakness that leads to an intimate night together.