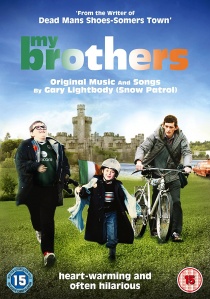 Starring Sarah Green (The Guard, Love and Savagery), Eamon Hunt (Lassie, Inside I'm Dancing, Adam & Paul), Don Wycherley (Ondine, Perrier's Bounty, The General) and directed by Paul Fraser, from the writer of Dead Man's Shoes and Somers Town, My Brothers is released on DVD by High Fliers on 9th July 2012.

Stealing a dodgy bread van, brothers Noel (17 and serious), Paudie (11 and cocky, with dreams of playing for Liverpool) and Scwally (7 and obsessed with Star Wars) set out on an adventure across the wild Irish landscape to replace their dying fathers watch. Along the way they are side-tracked by odd local characters, they bicker amongst themselves and the van keeps breaking down. Their road trip to the seaside town of Ballybunion won't be easy, but it will bring the brothers closer together in this heart-warming and often hilarious family comedy.