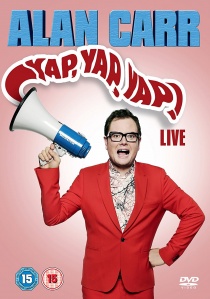 NewsStandup Comedy
News Article Go back to homepage
No stranger to yap Alan Carr will be yapping his way around the UK & Ireland with his brand new stand up show Yap, Yap, Yap! Live, released on Blu-ray and DVD on 16th November 2015 courtesy of Universal Pictures (UK).
Alan Carr
Chris How
Anthony Caveney, Mia Cross
Universal Pictures (UK)
1 hour 30 minutes
16/11/2015
#AlanCarr #YapYapYap
Thank you for supporting DVD365.net when you order using the link(s) below. As an Amazon Associate we earn from qualifying purchases
Buy DVD
Buy BD
Information

Throughout 2015, one of the nation's favourite comedians Alan Carr has been yapping his way around the UK and Ireland on his biggest stand-up tour to date, Yap, Yap, Yap! Live.

Released on Digital Download on 9th November 2015 and Blu-ray and DVD on 16th November 2015, Yap, Yap, Yap! Live is Alan's third stand-up DVD release and sees him return to his stand up roots with his hilarious take on life - all delivered with instant warmth and a generous stock of self-deprecating putdowns.

The original Tooth Fairy, Spexy Beast and Chatty Man himself performed at a staggering 170 sold - out theatre shows th roughout 2015, and has firmly established himself as the people's comedian. This is Alan Carr at his at his finest ... and funniest ! ... A not-to-be- missed DVD from one of comedy's national treasures.

Yap, Yap, Yap! Live promises the eclectic range of anecdotes that Alan is known for, as he discusses everything f rom him finally finding love and dog walking, to surprising holidays with his mother and his inability to grow facial hair. Alan's ability to find humour in the most mundane, everyday events is as irresistible as ever and this, combined with his hilarious audience interaction and off-the-cuff quips, makes Yap, Yap, Yap! Live the MUST HAVE stand - up comedy DVD of 2015.