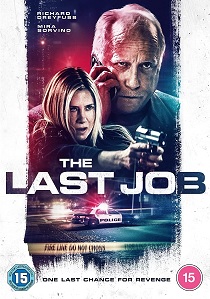 Screen icon Richard Dreyfuss takes on The Last Job in a brand new, all-action thriller, that stars Modern Family's Mira Sorvino as his daughter. This rip-roaring gangster movie hits the UK on DVD and digital 30th August 2021 from 101 Films.

Mob boss Ben Myers (Dreyfuss - Jaws, Stand By Me) has left his life of crime and violence behind him. Following a cancer diagnosis, he's hung up his hand-gun and vowed to spend time with his family before it's too late. But sometimes it's not that easy to leave...

When he returns home to discover his life savings have been stolen, he's not going to take it lying down. Avoiding the legal route and choosing not to involve his police detective daughter (Mira Sorvino - Mighty Aphrodite), Ben's mobster mentality kicks in and he takes matters into his own hands... the thieves are going to pay, whatever the cost.

Hell-bent on revenge, his hunt for the perpetrators becomes increasingly more brutal, Ben doesn't care who gets caught in the crossfire. As the body count rises, Ben is forced to confront his past and question what he's become.

Will he find redemption and make peace with The Last Job?

DVD
Packed with twists and turns from beginning to end, starring Matt Damon and directed by Academy Award winner Tom McCarthy, Stillwater is available to own on Blu-ray and DVD 6th December 2021 from Universal Pictures (UK). END_OF_DOCUMENT_TOKEN_TO_BE_REPLACED
Top PicksView