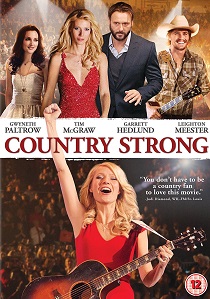 The DVD and Blu-ray are loaded with bonus materials, including the original ending, music videos with Sara Evans and Gwyneth Paltrow, deleted scenes, and an extended performance of Shake that Thing by Gwyneth Paltrow. Blu-ray exclusive materials include three behind-the-scenes featurettes: A Little Bit Country: The Costumes, Friends in High Places: The Cast of Country Strong, and Putting the Words in Their Mouths: The Songwriters. The toe-tapping hit soundtrack includes the Academy Award and Golden Globe® nominated song Coming Home, performed by Paltrow, as well as the new single, Me and Tennessee sung by McGraw and Paltrow, and music by country superstars including Ronnie Dunn, Sara Evans, Faith Hill, Hank Williams, Jr. and Lee Ann Womack.

Soon after a rising young singer (Garrett Hedlund) gets involved with a fallen country star (Gwyneth Paltrow), the pair embark on a career resurrection tour helmed by her husband/manager (Tim McGraw) and featuring a beauty queen-turned-singer (Leighton Meester).

DVD
Two lifelong friends find themselves at an impasse when one abruptly ends their relationship, with alarming consequences for both of them in The Banshees Of Inisherin, released on DVD and Blu-ray 30th January 2023 from Walt ... END_OF_DOCUMENT_TOKEN_TO_BE_REPLACED
Top PicksView