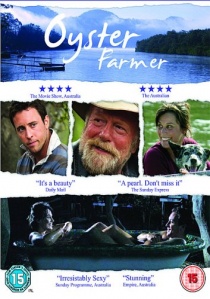 Lionsgate Home Entertainment UK is pleased to announce the release of Oyster Farmer. A quirky, Australian romantic drama, it is available to own on DVD from 12th February 2007 - perfectly timed for Valentine's Day.

Oyster Farmer is a sweetly humorous love story about Jack, a young guy desperate to pay his sister's hospital bills, who resorts to robbing a Sydney fish market with a frozen lobster and a balaclava made of 'fruit leather' - the ultimate solution to disposing of the evidence!

Having posted his loot up river to the isolated oyster farming community where his sister lives, he gets a job there with eighth generation oyster farmers and awaits his cash. But when proceeds from the robbery get lost en route, Jack starts to suspect the locals - including love interest Pearl who has a penchant for expensive shoes and seems to be collecting more of them.

But has he found something more valuable than money amongst the oysters? "This is an irresistible tale created by a young filmmaker, Anna Reeves, whose creative vision for the film sparkles with originality" says producer Anthony Buckley. Oyster Farmer was filmed on the spectacular Hawkesbury River, near Sydney. Written and directed by Anna Reeves and produced by veteran Australian filmmaker Anthony Buckley and UK producer Piers Tempest, it's a genuinely touching slice of Australian life.

Featuring an internationally-acclaimed cast including Aussie legend Jack Thompson (Midnight in the Garden of Good and Evil), Kerry Armstrong (Lantana), David Field (The Night They Called it a Day), Jim Norton (Harry Potter and the Chamber of Secrets) and Claudia Harrison (Cat's Meow). Hot newcomer Alex O'Loughlin (once tipped for the Casino Royale role that eventually went to Daniel Craig) plays Jack, and Diana Glenn plays the irresistible Pearl.