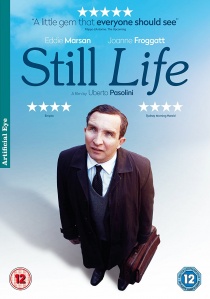 Meticulous and organised to the point of obsession, John May (Marsan) is a council worker charged with finding the next of kin of those who have died alone. When his department is downsized and he is given his final case, John finds himself on a liberating journey of self-discovery that will make him question everything and start living life at last.

A touching tale charmingly rendered by Uberto Pasolini, Still Life demonstrates that diligence and kindness to your fellow man might just inadvertently lead to the resolution of personal problems as well.

3D-BD
The surviving members of the resistance face the First Order once again, and the legendary conflict between the Jedi and the Sith reaches its peak as Star Wars: The Rise of Skywalker is released on ... END_OF_DOCUMENT_TOKEN_TO_BE_REPLACED
Top PicksView