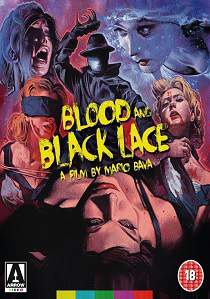 The Cristiana Haute Couture fashion house is a home to models... and backstabbing... and blackmail... and drug deals... and MURDER as Blood and Black Lace is released on dual format DVD and Blu-ray by Arrow Video on 13th April 2015.

Having established a template for the giallo with The Girl Who Knew Too Much, Mario Bava set about cementing its rules with Blood and Black Lace. In doing so he created one of the most influential films ever made an Italian classic that would spearhead the giallo genre, provide a prototype for the slasher movie, and have a huge effect on filmmakers as diverse as Dario Argento and Martin Scorsese.

Newly restored from the original camera negative and presented here in its original, uncut Italian form, this dual-format release allows fans to see Blood and Black Lace afresh and offers newcomers the ideal introduction to a major piece of cult filmmaking.

HotDVDBD
From the producers of Nobody and John Wick comes a bare-knuckle, coal-dark holiday action-comedy that says you should always bet on red as Violent Night sledges in on DVD and Blu-ray 6th March 2023 from Warner Home Video. END_OF_DOCUMENT_TOKEN_TO_BE_REPLACED
Top PicksView