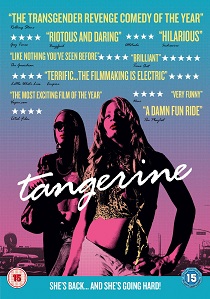 It's Christmas Eve in Tinseltown and Sin-Dee (newcomer Kitana Kiki Rodriguez) is back on the block. Upon hearing that her pimp boyfriend (James Ransone; Starlet, Generation Kill) hasn't been faithful during the 28 days she was locked up, the working girl and her best friend, Alexandra (newcomer Mya Taylor), embark on a mission to get to the bottom of the scandalous rumour. Their rip-roaring odyssey leads them through various subcultures of Los Angeles, including an Armenian family dealing with their own repercussions of infidelity.

Director Sean Baker's prior films (Starlet, Prince of Broadway) brought rich texture and intimate detail to worlds seldom seen on film. Tangerine follows suit, bursting off the screen with energy and style. A decidedly modern Christmas tale told on the streets of L.A., Tangerine defies expectation at every turn.

Tangerine is released on DVD by Metrodome on 28th March 2016.

HotDVDBDUHD
Yet to fulfill their rock and roll destiny, the now middle aged best friends set out on a new adventure when a visitor from the future warns them that only their song can save life as we know it as Bill & Ted Face The Music is released on DVD, Blu-ray and 4K UHD 25th January 2021 from Warner Home Video. END_OF_DOCUMENT_TOKEN_TO_BE_REPLACED
Hot PicksView