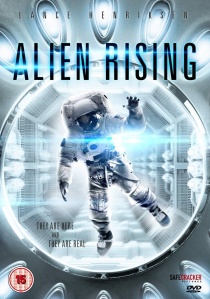 When a seemingly abandoned alien spacecraft is discovered orbiting Neptune, a top secret expedition is sent to investigate. In the derelict hulk they discover two surviving alien life forms telepathically linked to one another....

13 years later a saavy, ex-DEA agent and martial arts expert finds herself renditioned to a high security establishment on a remote island where they are conducting experiments on the incarcerated aliens.

She is coerced into helping the Colonel, (Lance Henriksen), who commands the facility, into unlocking the secrets of the extra-terrestrial psychic link. But she soon discovers that the military intend to hijack the research to transform the aliens into telepathically controlled weapons.

Events spiral out of control when it becomes apparent that the Colonel is psychotic and intends to sell the creatures to any rouge state or terrorist organisation that will pay him the highest price.

The extraterrestrial sci-fi thriller Alien Rising is released on DVD by Safecracker Pictures on 9th March 2015.