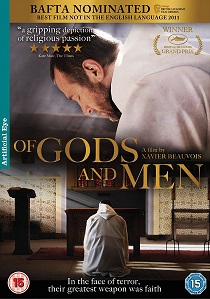 News
News Article Go back to homepage
Winner of the Grand Prix at the Cannes Film Festival 2010 and nominated for Best Film Not in the English Language at the 2011 BAFTAs, the highly-acclaimed Of Gods And Men comes to DVD and Blu-ray on 11th April 2011 from Artificial Eye.
Loïc Pichon, Jacques Herlin, Philippe Laudenbach, Olivier Rabourdin, Michael Lonsdale, Lambert Wilson
Xavier Beauvois
Frantz Richard, Jean-David Lefebvre, Etienne Comar, Pascal Caucheteux
Artificial Eye
2 hours 2 minutes
11/04/2011
Thank you for supporting DVD365.net when you order using the link(s) below. As an Amazon Associate we earn from qualifying purchases
Buy DVD
Buy BD
Information

Winner of the Grand Prix at the Cannes Film Festival 2010 and nominated for Best Film Not in the English Language at the 2011 BAFTAs, the highly-acclaimed Of Gods And Men comes to DVD and Blu-ray on 11th April 2011 from Artificial Eye.

Based on a true story and directed by Xavier Beauvois (Nord, The Chameleon), this quietly powerful and moving film explores the last few months in the life of a small community of Christian monks in Algeria. Caught in the middle of a conflict between a government and extremist Muslim terrorist groups, the head of a Cistercian monastery, Dom Christian, played by Lambert Wilson (The Matrix Reloaded, Flawless) and his Brothers are forced to assess the human, political and religious stakes of their decision: leave for their own safety, or stay and honour their deep ties to the villagers and the spirit of peace, charity and dignity with which they try to counter the violence eating away at the country.

The story captures the spirit of events leading up to the kidnapping and final fate of seven French monks of Tibhirine in 1996, the exact circumstances of which still remain a mystery to this day. Gods And Men bears witness to the reality of the monks' commitment and the strength of the message of peace they wish to share by staying among their Muslim brothers: the possibility of a fraternal and spiritual common ground between Christianity and Islam.

Parallel to the wake felt by governments, religious communities and public opinion the world over in the 15 years since the monks' disappearance, Of Gods And Men leaves behind a memorable and long-lasting effect on its audience.