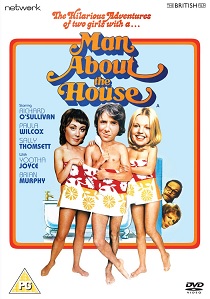 Man About The House

Catering student Robin Tripp sees nothing untoward about sharing a flat with two girls, Chrissy and Jo. It's an arrangement that suits all parties admirably unless the girls try their hand at cooking or Robin's animal urges get the better of him but it's a source of ongoing consternation to their landlords, Mr and Mrs Roper!

This feature-film spin-off from the massively popular television series stars Richard O'Sullivan, Paula Wilcox and Sally Thomsett as the groovy flatmates and Yootha Joyce and Brian Murphy as landlords George and Mildred.

DVD
From the acclaimed director of fan-favourites such as Baby Driver, Shaun of the Dead and The World's End comes the tribute to 1960s London in Last Night In Soho, available to own on DVD, Blu-ray and 4K UHD 31st January 2022 ... END_OF_DOCUMENT_TOKEN_TO_BE_REPLACED
Top PicksView