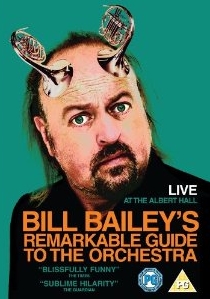 Comedian and classically trained musician, Bill Bailey joins forces with the brilliantly versatile BBC Concert Orchestra and musical maestro Anne Dudley, one of the UK's most celebrated composers and arrangers. Remarkable Guide is Bill's own uniquely hilarious and irreverent guide to the sounds, styles, and instruments of the orchestra, with a wide and eclectic range of subjects, including music for 70's cop shows, sci-fi films, horror movies, news themes, plus some of Bill's own songs re-imagined for an orchestra, and including Anne's own, specially written new works. The Remarkable Guide DVD and Blu Ray discs feature the full 1 hour 45 minute live show, plus an additional 17 minutes of bonus material.

Released alongside is Bill Bailey: The Inevitable Box Set which features Bill's sell out live shows from the past decade and beyond. The box set includes Bill's debut stand up show Cosmic Jam, recorded at the Bloomsbury Theatre in 1996, his 2001 stand up show Bewilderness, the smash hit comedy show of 2004 Part Troll, filmed at Hammersmith Apollo, his sell out arena show Tinselworm recorded at Wembley Arena and of course, Bill Bailey's Remarkable Guide To The Orchestra.

BD
A 13-year-old girl named Meilin turns into a giant red panda whenever she gets too excited in Disney and Pixar's 25th feature film Turning Red, released on DVD, Blu-ray and 4K UHD 2nd May 2022 from Walt Disney Home ... END_OF_DOCUMENT_TOKEN_TO_BE_REPLACED
Top PicksView