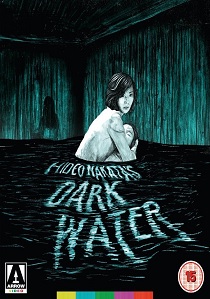 After terrifying audiences worldwide with the blockbuster J-horror classic Ring and its sequel, director Hideo Nakata returned to the genre for Dark Water, another highly atmospheric, and critically acclaimed, tale of the supernatural which took the common theme of the dead wet girl to new heights of suspense and drama.

Based upon on a short story by Ring author Koji Suzuki, Dark Water follows Yoshimi, a single mother struggling to win sole custody of her only child, Ikuko. When they move into a new home within a dilapidated and long-forgotten apartment complex, Yoshimi begins to experience startling visions and unexplainable sounds, calling her mental well-being into question, and endangering not only her custody of Ikuko, but perhaps their lives as well.

Beautifully shot by the same cinematographer as Ring and Pulse, and featuring an especially unnerving sound design, Dark Water successfully merges spine-tingling tension with a family s heart-wrenching emotional struggle, creating one of the very finest and most unsettling contemporary Japanese horror films.

Dark Water is released on dual-format DVD and Blu-ray by Arrow Films on 10th October 2016.

UHD
In Disney's Mulan, released on DVD, Blu-ray and 4K UHD 10th November 2020, a fearless young woman risks everything out of love for her family and her country to become one of the greatest warriors ... END_OF_DOCUMENT_TOKEN_TO_BE_REPLACED
Hot PicksView