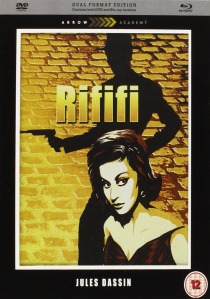 A seminal work of crime filmmaking that lead the young critic Francois Truffaut to declare "the best Film Noir I have ever seen", Jules Dassin's Rififi [Du rififi chez les hommes], released on DVD and Blu-Ray from from Arrow Films on 9th May 2011, has influenced films as diverse as Reservoir Dogs and Ocean's Eleven since its release.

Following, Tony le Stephanois (Jean Servais), a master thief fresh out of jail, wearing a harried look and suffering ill health he refuses to be involved with crime, until he finds his girlfriend shacked up with a rival gangster. With little reason to keep living he plans a final job. Tony sets about finding his crew and meticulously planning the job; a robbery of the jewellery store Mappin & Webb.

Rififi revolves around the central heist, famed for its finite detail and incredible tension, but the drama does not end at the heist like so many other crime films. Dassin's film is a humanist tale that hinges on the loyalty among thieves and draws on the fatalistic, doom laden lives common to crooks and thieves in pulp literature.

An instant commercial success in Paris and worldwide, the film was also very well received by the critics with Jules Dassin being awarded the best director prize at the prestigious Cannes Film Festival. Arrow Academy is proud to present Jules Dassin's legendary film in 1080p high definition for the first time in the UK.

DVD
When the world is locked down, they'll find their ticket out in Locked Down, released on DVD 7th June 2021 from Warner Home Video. END_OF_DOCUMENT_TOKEN_TO_BE_REPLACED
Top PicksView