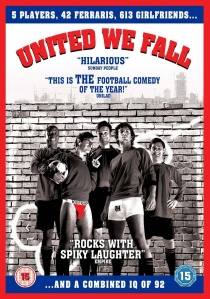 Scholes, Giggs, Neville, Neville, Butt and Beckham... The Class Of '92 transformed a football team, won trophies and international caps and ushered in a new era for football... Now meet Hunter, Fallis, Keegan, Kurtz and Amoako. They followed in their predecessors' illustrious footsteps and were on the verge of matching their achievements in one record-breaking season. And then it all fell apart.

United We Fall charts the rise - and fall - of this quintet in a hilarious spoof soccer documentary - a mock-soccumentary, if you will - and answers the question asked of another Manchester United legend, George Best: "Where did it all go wrong?" It comes to DVD on 9th February 2015 courtesy of Metrodome.

Improvised and filmed at breakneck speed by Gary Sinyor (Leon The Pig Farmer), the film, which was released in cinemas across the country in October, tells the warts and all tale of footballers gone bad. And no one - not even the British Prime Minister and FIFA is spared.

Racism, homophobia, philandering footballers - all get a proverbial roasting in this comedy that's less Class Of 92 and more IQ of 92.

Olly Hunter (Jack Donnelly - Atlantis) is the bankable brand of the team; Danny Keegan (Ryan Pope - 'Psycho Paul' from Ideal) the millionaire socialist; Stevo Fallis (James Rastall - Marchlands) the dirty player and practical joker; Kwasi 'Modo' Amoako (Matthew Avery - Doctors) is a Ghanaian who likes the high-life and lives a rapper's lifestyle and 'Kurtzie' (Jonathan Broke - The Other Half) is the German keeper with an obsessive personality.

They are the heart and soul of the United team who are only a few hours away from a historical treble. How did it all go pear-shaped for them? The unravelling of their season is told in interviews with the players and, climactically, in a toe crunching reunion with the players - and their WAGs (or in one case a WAB). The final result will leave you literally jumping for Ghana...

Roger was an avid supporter of independent film, and an early champion of the work of iconic filmmakers including Werner Herzog, Errol Morris and Martin Scorsese, all of whom are interviewed in the film.