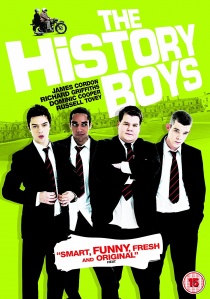 The highly acclaimed and hugely entertaining film, The History Boys, penned by Alan Bennett and based on his award-winning play, is released by Twentieth Century Fox Home Entertainment on DVD on 5th March 2007.

This warm, funny and touching film has an all star cast including Richard Griffiths (Harry Potter and the Prisoner of Azkaban), Stephen Campbell Moore (Bright, Young, Things), Dominic Cooper (Starter for Ten), Samuel Barnett (Mrs Henderson Presents) and James Corden (Starter for Ten) and is directed by Nicholas Hytner (The Madness of King George); his fourth feature film and his second collaboration with Alan Bennett.

Set in Sheffield in the 1980's, this immensely funny British comedy follows the fortunes of an unruly bunch of bright sixth form boys in pursuit of a place at Oxbridge. However, their loyalties to the popular and eccentric English teacher, Hector (Griffiths) and the dry, prim history mistress Mrs Linnott (de la Tour) are torn when a young, highly driven and results orientated supply teacher, Mr Irwin (Campbell Moore), is recruited to ensure they achieve the grades that the Headmaster (Clive Merrison) is so desperate for them to realise.

Encapsulating all that is popular and engaging about Bennett's work, The History Boys is a warm and nostalgic look at school life and the anarchy of adolescence. The film includes Bennett's inimitable trade mark humour, impeccable observation of everyday life and a wry and completely irresistible manner.

The History Boys is a fresh, uproarious, pacy and heart-warming tale written by a master of his genre; a snapshot of school life in the eighties and the trials and tribulations that go hand in hand with adolescence, all to the background sounds of The Clash, New Order and The Pretenders.