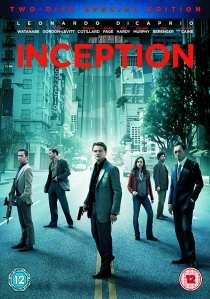 From the acclaimed filmmaker of The Dark Knight and Batman Begins comes the heart-pounding thrill ride Inception, exploding onto Blu-ray and DVD this 6th December 2010 from Warner Home Video. Featuring an all-star international cast this original mind-bending blockbuster travels the globe exploring the secret and infinite world of dreams. The Blu-ray disc's exciting special features include a unique in-movie experience with Christopher Nolan, Leonardo DiCaprio and the rest of the cast as they delve into the intricacies of the film, a never-before-seen documentary conceived by Nolan on dream research, and much more.

Cobb is a skilled thief and coveted player when it comes to extraction: the stealing of valuable secrets from deep within the mind during a subject's dream state. His skill, though, has turned him into an international fugitive and he is now being offered a chance at redemption. One last job. One last job to give him his life back. But only if he can pull off the impossible - inception -- not stealing an idea but planting one. If Cobb and his team succeed, it will be the perfect crime. However, no amount of meticulous planning can prepare the team for the dangerous enemy that seems to predict their every move. An enemy that only Cobb could have seen coming.

HotDVDBD3D-BDUHD
The surviving members of the resistance face the First Order once again, and the legendary conflict between the Jedi and the Sith reaches its peak as Star Wars: The Rise of Skywalker is released on DVD, Blu-ray, 3D Blu-ray and 4K UHD 20th April 2020 from Walt Disney Home Entertainment. END_OF_DOCUMENT_TOKEN_TO_BE_REPLACED
Hot PicksView