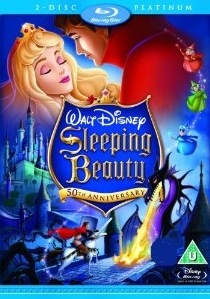 NewsMusicDisney
News Article Go back to homepage
In celebration of the 50th anniversary of its original release, the two-disc Disney Platinum Edition of Sleeping Beauty is released on 27th October 2008 and will be the first ever to be released on Blu-ray.
Barbara Jo Allen, Barbara Luddy, Verna Felton, Eleanor Audley, Bill Shirley, Mary Costa
Clyde Geronimi
Walt Disney Home Entertainment
1 hour 15 minutes
27/10/2008
Thank you for supporting DVD365.net when you order using the link(s) below. As an Amazon Associate we earn from qualifying purchases
Buy BD
Buy DVD
Information

Sleeping Beauty, Walt Disney's classic tale of love triumphing over evil, has been released from the Disney vault for a limited time only to mark the 50th anniversary of its original release. In celebration of this landmark event, the two-disc Disney Platinum Edition, released on 27th October 2008, will be the first ever to be released on the high definition format, Blu-ray.

With digitally re-mastered sound and 1080p high definition picture the release allows fans to enjoy one of the studios most ambitious projects like never before.

The breath-taking action sequences and extravagant musical production numbers will charm adults and children alike as they chuckle at the antics of Flora, Fauna and Merryweather, the bubbly and bumbling fairy godmothers, and cheer the gallant Prince Phillip in his quest to save Princess Aurora.

Sleeping Beauty also comes with a large selection of bonus features. Children will love the Princess Fun Facts and Once upon a Dream music video, while adults will be entertained by Picture Perfect: The Making of Sleeping Beauty. The Blu-ray disc also comes with a host of exclusive extras. The new technology allows the viewer to interact with the film like never before with customised menus and games such as Cine-explore, Maleficent's Challenge and Dungeon Escape. This release offers families the chance to own a must-see classic, one which has played a pivotal role in many a young girl's life.

The timeless tale begins with the birth of Princess Aurora. As the kingdom rejoices, her three fairy god mothers Flora, Fauna and Merryweather bestow magical gifts upon the child. Everything is perfect until the evil sorceress Maleficent arrives, upset at being mocked by Merryweather she curses Aurora to prick her finger on a poisoned spinning wheel and die on her 16th birthday. Merryweather tries to undo the curse by casting a spell so that Aurora will fall into a deep and ageless sleep that can only be broken by a true love's kiss.

The fairy godmothers take Aurora deep into the forest to protect her from her fate. Re-named Briar Rose, the princess grows up blissfully unaware of her curse until, on her 16th birthday, she meets the dashing Prince Philip and falls in love. Seizing her opportunity, Maleficent captures the Prince and tricks Aurora into touching the spinning wheel, fulfilling her dastardly plan.

Flora, Fauna and Merryweather manage to set the Prince free, however in order to awaken Aurora, he must battle through Maleficent's tangle of weeds before coming face-to-face with the sorceress herself. Will he make it in time and restore joy to the kingdom?