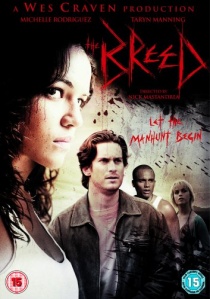 Starring Michelle Rodriguez (Lost, S.W.A.T.) and Oliver Hudson (Dawson's Creek), The Breed is a jump-out-of-your-seat thriller about a group of friends on vacation that become prey to a sinister pack of killer dogs. Produced by visionary filmmaker Wes Craven, The Breed is available to own and rent on DVD from 27th August 2007 from Pathe Distribution Ltd.

The group are soon joined by a seemingly innocent stray puppy found wandering nearby the house and they learn that the island was once controlled by a special canine research unit. Later that evening when Sara follows the puppy outside, she is viciously attacked by another dog. Fearing the bite may carry the rabies infection, the friends decide to leave the island early.

However their sea plane has been set adrift by a larger pack of dogs. The friends soon find themselves fighting for their lives against the breed of mutated canines, genetically engineered to hunt and kill, who don't intend on the group making it off the island alive.

Outnumbered and trapped, the five struggle to outsmart and outrun this terrifying species.

HotBD
Two of Britain's most notorious brothers The Krays were taken on by another famous pair of siblings The Kemps in Peter Medak's big screen gangster biopic set for a Limited Edition Blu-ray release from Second Sight Films on 12th July 2021. END_OF_DOCUMENT_TOKEN_TO_BE_REPLACED
Top PicksView