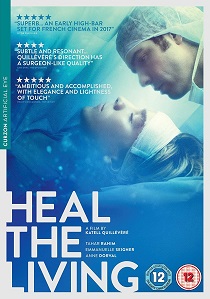 From the celebrated French director Katell Quillévéré (Love Like Poison, Suzanne) comes Heal the Living, a powerful but delicately crafted ensemble drama on the fragility and fluidity of life.

Simon is living the life of a typical teenage boy - surfing, cycling and chatting up girls - until a tragic accident leaves him stretched out on a hospital bed, technically alive, but brain dead. While the news means agony for his family, it brings bittersweet hope for Claire, a woman on the waiting list for a desperately needed heart transplant. With time running out, Simon's parents are forced to make a painful decision with consequences that will ripple out and touch the lives of people they will never meet.

Based on Maylis de Kerangal's acclaimed novel and featuring a cast of top French actors including Tahar Rahim, Emmanuelle Seigner and Anne Dorval, Heal the Living is a moving meditation on loss, hope and the infinite ties that connect us. Executed with poise, precision and understated originality, it cements Quillévéré's place among France's most exciting young filmmaking talent.

Heal the Living is released on DVD and Blu-ray 3rd July 2017 from Curzon Artificial Eye.

Related Articles
Samba, The Informant, The Past, Free Men, The Serpent
Venus in Fur, In The House, The Diving Bell and the Butterfly
Rust And Bone, Raw: Limited Edition
Zaytoun
Comments
UHD Releases News Pick