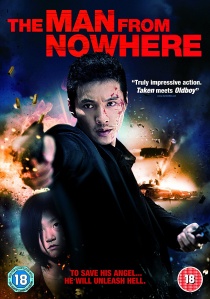 NewsThriller
News Article Go back to homepage
A box office smash in Korea, where it became the highest grossing movie of 2010 and swept the board at the Korea Film Awards, The Man From Nowhere, released on DVD by eOne on 11th April 2011, is a superlative, action-packed revenge thriller that owes much to the influence of many Hollywood blockbusters.
Jong-pil Lee, Seong-oh Kim, Hee-won Kim, Tae-hoon Kim, Sae-ron Kim, Won Bin
Jeong-beom Lee
Tae-hun Lee, Katharine Kim
eOne
1 hour 59 minutes
11/04/2011
As an Amazon Associate we earn from qualifying purchases
Buy DVD
Information

The Man From Nowhere is a superlative, action-packed revenge thriller that owes as much to the influence of blockbusters Taken, Man On Fire and Leon as it does to the heroic bloodshed movies of John Woo (Hard Boiled; A Better Tomorrow). A brutal, breathtakingly paced movie that balances scenes of shocking violence with moments of emotional depth, the film boasts a number of stylish action set pieces, including what is "arguably the best knife fight ever put on screen" (New Korean Cinema).

A box office smash in Korea, where it became the highest grossing movie of 2010 and swept the board at the Korea Film Awards taking honours for Best Actor, Best New Actress, Best Cinematography, Best Music, Best Lighting, Best Visual Effects and Best Editing, The Man From Nowhere is, without doubt, the hottest Korean movie to come along in recent years and puts Korean cinema firmly back on the world cinema map.

Scarred by traumatic events resulting from his past, former special agent Tae-shik (Bin Won) lives in solitude running a pawnshop in a rundown neighbourhood. His only contact with the world is through his customers and his next-door neighbours, a young girl named So-mi (Sae-ron Kim) and her mother, an exotic club dancer and drug addict. Neglected by her mother and shunned by the kids at school, So-mi gradually forms a bond of friendship with the loner Tae-shik.

But one day, So-mi and her mother disappear. When it becomes apparent that mobsters connected to So-mi's mother's drug dealing have kidnapped them, Tae-shik is forced to leave his private sanctuary and to go out into the world in search of his one and only friend. In a bid to ensure So-mi's safety, Tae-shik agrees to perform a one-off job for the gangsters holding the girl. The job turns out to be a set-up that makes him the target of both a rival gang and of an intense police manhunt. On the run from both sides of the law, and risking him life every step of the way, Tae-shik moves ever closer to discovering So-mi's whereabouts, but in doing so, he also risks revealing the hidden secrets of his past.

Starring Korean heartthrob Bin Won (Brotherhood; Mother) and newcomer Sae-ron Kim (A Brand New Life), The Man From Nowhere is a "slick, stylish and gut wrenching" (Twitch) thriller that begins with a bang and hurtles to a killer climax that will leave action fans baying for more.

HotBD
Two of Britain's most notorious brothers The Krays were taken on by another famous pair of siblings The Kemps in Peter Medak's big screen gangster biopic set for a Limited Edition Blu-ray release from Second Sight Films on 12th July 2021. END_OF_DOCUMENT_TOKEN_TO_BE_REPLACED
Top PicksView