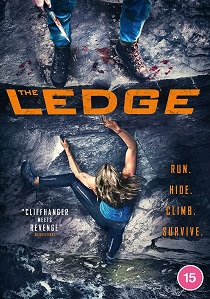 A rock climbing adventure between two friends turns into a terrifying nightmare. After Kelly (Ashworth) captures the murder of her best friend on camera, she becomes the next target of a tight-knit group of friends who will stop at nothing to destroy the evidence and anyone in their way. Terrified, Kelly finds herself in a free-climbing chase up a freezing mountain, pursued by the group of murderous men.

If she's to escape this deadly game of cat and mouse she must dig deep, do all she can to survive, and climb...

The Ledge is released on DVD 21st March 2022 from Signature Entertainment.