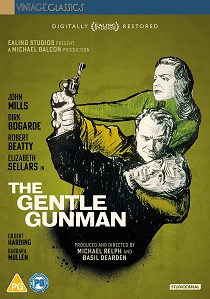 A brand-new restoration of the classic Basil Dearden Ealing drama The Gentle Gunman is released on DVD and Blu-ray 7th March 2022 from StudioCanal.

At the height of World War II, Terry (John Mills) and his younger brother Matt (Dirk Bogarde) are undercover IRA foot-soldiers working in London. But While Matt is fully committed to the cause, Terry is now beginning to question their violent methods. When two fellow IRA members are arrested Terry and Matt are asked to break them out.

Will Terry follow his orders or will his misgivings put the two in harm's way?

HotDVDBDTV
DCI Tom Brannick returns, as the murder of a crooked accountant unravels a trail of greed that threatens to expose the true identity of the legendary assassin, codenamed, Goliath in Bloodlands: Series 2 released on DVD and Blu-ray 14th November 2022 from Dazzler Media. END_OF_DOCUMENT_TOKEN_TO_BE_REPLACED
Top PicksView