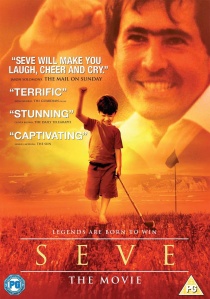 Despite being blocked at almost every turn in pursuit of the sport he loved, Seve Ballesteros fought against adversity to become the most spectacular and charismatic golfer to ever play the game. Seve combines dramatic recreations with electrifying archive footage to tell his incredible rags to riches story; from humble beginnings on the beaches of Spain - where aged six he taught himself the game with a broken 3 iron strapped to a stick - to becoming world number one and the greatest golfer of a generation.

Directed by John-Paul Davidson (Stephen Fry in America, Brazil with Michael Palin) and edited by Saska Simpson (The Three Kings, Paranormal Witness) with original score by Academy Award winner Stephen Warbeck (Shakespeare in Love), Seve is produced by Stephen Evans (Much Ado About Nothing, BAFTA nominated The Madness of King George and Confessions of a Dangerous Mind) with the full support of the Seve Ballesteros Foundation.

Seve the Movie will be released by Entertainment in Video on DVD and Blu-Ray on 20th October 2014.