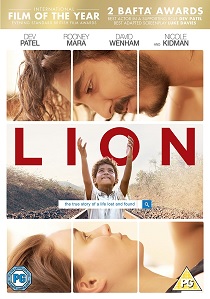 NewsDrama
News Article Go back to homepage
Inspired by a true story, Lion, released on DVD and Blu-ray by Entertainment in Video on 22nd May 2017, shows us that even if we lose our way we should never lose hope.
Dev Patel, Rooney Mara, David Wenham, Nicole Kidman, Abhishek Bharate, Sunny Pawar
Garth Davis
Iain Canning, Angie Fielder
Entertainment in Video
1 hour 54 minutes
22/05/2017
#Lion
Thank you for supporting DVD365.net when you order using the link(s) below. As an Amazon Associate we earn from qualifying purchases
Buy DVD
Buy BD
Information

The journey begins for audiences everywhere when Entertainment in Video release the critically acclaimed Lion on Blu-ray and DVD and 22nd May 2017.

Lion follows five-year-old Saroo (Sunny Pawar) who gets lost on a train traveling away from his home and family. Frightened and bewildered, he ends up thousands of miles away, in chaotic Kolkata. Somehow he survives living on the streets, escaping all sorts of terrors and close calls in the process, before ending up in an orphanage that is itself not exactly a safe haven.

Eventually Saroo is adopted by an Australian couple (Nicole Kidman and David Wenham), and finds love and security as he grows up in Hobart. As an adult, not wanting to hurt his adoptive parents' feelings, Saroo (Dev Patel) suppresses his past, his emotional need for reunification and his hope of ever finding his lost mother and brother. But a chance meeting with some fellow Indians reawakens his buried yearning.

Armed with only a handful of memories, his unwavering determination, and a revolutionary technology known as Google Earth, Saroo sets out to find his lost family and finally return to his first home.

Inspired by a true story, Lion shows us that even if we lose our way we should never lose hope.

Related Articles
Romper Stomper, Paper Planes, 300: Rise Of An Empire, Top of the Lake, 300, Moulin Rouge, 300, The Proposition
Before I Go To Sleep, The Railway Man, Stoker, The Paperboy, The Killing Of A Sacred Deer, Queen of the Desert, The Beguiled, Top of the Lake: China Girl, Big Little Lies, Strangerland, Paddington, Before I Go To Sleep, Grace of Monaco, The Railway Man, The Paperboy, Stoker, Trespass, Just Go With It, Rabbit Hole, Nine, Fur: An Imaginary Portrait of Diane Arbus, How To Talk To Girls At Parties, Batman Forever, Eyes Wide Shut, The Interpreter, Moulin Rouge, Practical Magic, The Stepford Wives, How To Talk To Girls At Parties, Aquaman, Destroyer, The Upside, Boy Erased, Big Little Lies: Season 2, The Goldfinch, Bombshell, Bombshell, The Undoing
Una, A Ghost Story, Carol, Pan, Her, Side Effects, The Girl with the Dragon Tattoo, The Social Network, Nightmare Alley
Top of the Lake: China Girl, Top of the Lake
The Man Who Knew Infinity, CHAPPiE, The Second Best Exotic Marigold Hotel, The Newsroom: Season 2, The Newsroom: Series 1, Slumdog Millionaire, Hotel Mumbai, The Personal History of David Copperfield, The Green Knight
For your consideration