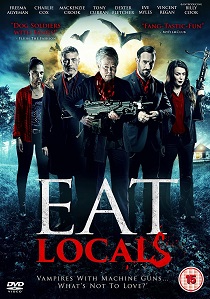 Vampires with machine guns... what's not to love?

Sebastian Crockett is in for the ride of his life when his night of desire with sexy, alluring cougar Vanessa turns into a fight for survival when she introduces him to some of her friends - a coven of hungry vampires - at a remote farmhouse.

As if Sebastian's night couldn't get any worse, a heavily armed band of mercenary vampire hunters led by the steadfast Colonel Bingham crashes the party - and much like the vampires, they're out for blood.....it's going to be a night to remember!

HotDVDBD
King Of Thieves, released 21st January 2019 on DVD and Blu-ray from StudioCanal, is the incredible true story of the spectacular Hatton Garden diamond heist, the biggest and most daring in British history. END_OF_DOCUMENT_TOKEN_TO_BE_REPLACED
Comments
BD Releases News Pick

BD
After moving to a new town, two brothers discover that the area is a haven for vampires as the classic The Lost Boys is released on 4K UHD 20th September 2022 from Warner Home Video. END_OF_DOCUMENT_TOKEN_TO_BE_REPLACED
Top PicksView