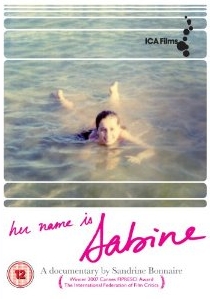 Her Name is Sabine

NewsThriller
News Article Go back to homepage
Directed by César Award winning actress Sandrine Bonnaire, the extraordinary documentary Her Name is Sabine is released on DVD on the 6th October 2008 by ICA Films and provides a wonderful opportunity to own a truly astonishing piece of filmmaking.
ICA Films
Unknown
06/10/2008
Thank you for supporting DVD365.net when you order using the link(s) below. As an Amazon Associate we earn from qualifying purchases
Buy DVD
Information

Directed by César Award winning actress Sandrine Bonnaire, Her Name is Sabine was described by The International Federation of Film Critics at Cannes, 2007, as 'the most beautiful film that Cannes has given us this year'. Now, the 6th October 2008 DVD release of this extraordinary documentary by ICA Films provides a wonderful opportunity for you to own a truly astonishing piece of filmmaking.

Her Name is Sabine is a sensitive and very personal portrait of Sandrine's younger sister Sabine. Combining film footage taken at Sabine's current care home as well as 25 years of home-movies, Sandrine charts the disturbing and heartbreaking journey of her sister from a young independent woman with special needs to an adult in need of constant supervision.

Once lively, vivacious and talented, Sabine taught herself to play Bach on the piano, loved to travel and had a real capacity to enjoy life. As her elder sisters grew up and began to leave home, it was left to their mother to take sole charge of Sabine. Initially, Sabine was able to visit her sisters, but a move to the country made this more and more difficult and Sabine gradually became withdrawn and agitated. With her mother unable to cope, the only solution seemed to be institutional care. However, five years in a psychiatric hospital crushed Sabine's spirit and abilities as she succumbed to the inadequate system of state institutions.

The contrast between the young girl in the early home movies and the dispirited 38-year-old woman is shocking and devastating, but there is hope. With the love and unwavering support of her family, and the proper care Sabine is receiving in a home in the Charente region, she is slowly beginning to claw back some of her dignity and spirit.

Sandrine Bonnaire is one of France's best known actresses. She was born the 31 May 1967 in Gannat, and as a promising young French actress garnered acclaim for her very first screen performance, in Maurice Pialat's À nos amours (1983). Sandrine Bonnaire won a French best actress Cesar for her role as the aimless vagrant in Agnes Varda's haunting Vagabond (1985) and turned in acclaimed performances in Pialat's Under Satan's Sun (1987), Patrice Leconte's stylish thriller Monsieur Hire (1989) and Claude Chabrol's A Judgment in Stone (1995).