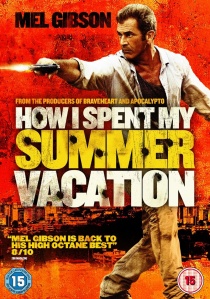 Available to own on DVD & Blu-ray for the first time from 24th September 2012, How I Spent my Summer Vacation is directed by Adrian Grunberg and produced by and also starring Oscar winner, Mel Gibson (Edge of Darkness), Peter Stormare (Lockout) and Dean Norris (Breaking Bad).

How I Spent my Summer Vacation opens with an explosive high-speed car chase. With a boot-load of cash and a dying partner in the backseat, Driver (Mel Gibson) is trying to outrun the U.S. Border Patrol. He spectacularly crashes on the Mexican side of the border and is apprehended by corrupt Mexican authorities. Following his arrest, he is sent to the strange and dangerous world of 'El Pueblito', the worst prison in all of Mexico. Gibson is determined to get his cash back but he quickly learns that El Pueblito is not an easy place for an outsider, unless it's with the help of someone who knows the ropes - a 10-year-old kid.

After working alongside Gibson on Apocalypto (2006) and Edge of Darkness (2010), How I Spent my Summer Vacation reunites Adrian Grunberg with Mel Gibson for his directorial debut. With strong performances, gritty visuals and dark comedy throughout, Mel Gibson is back in action hero mode in the slick and stylish, How I Spent my Summer Vacation, available to own on DVD and Blu-ray from 24th September 2012 courtesy of Lionsgate Home Entertainment.

HotDVDBDUHD
An action thriller unlike any other, a young getaway driver relies on the beat of his personal soundtrack to be the best in the game in Baby Driver, the newest explosion of genre-crossing excitement from writer-director Edgar Wright, released on 4K Ultra HD, Blu-ray and DVD ... END_OF_DOCUMENT_TOKEN_TO_BE_REPLACED
Top PicksView