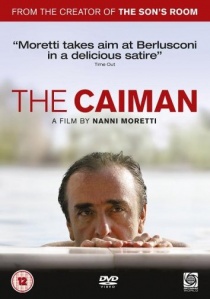 The Caiman was released in Italy just two weeks before the most acrimonious Italian general election ever and is thought to have been a factor in Silvio Berlusconi's defeat. The film picked up six Donatello awards including Best Director, Best Film and Best Actor and showed at both the Cannes and London Film Festivals.

Bankrupt in his professional and personal life, Z-grade movie producer Bruno is finding it impossible to raise the finance for his latest project. Entangled in debt struggling with a capsizing marriage and his wayward kids, Bruno is going under. By chance, he meets a young director who gives him her script, The Caiman. At first Bruno takes it for a half-hearted thriller; a more careful - if belated - reading reveals a film about Berlusconi. No longer can he stand back. He must set up the production, find the lead actor, sort out the financing of the film - all the while trying to pick up the pieces of his broken relationship.

Whilst being an outright political film, The Caiman is also a film about love and an homage to cinema according to Moretti. The film stars Silvio Orlando, Margherita Buy, Jasmine Trinca and Cecilia Dazzi

BD
A 13-year-old girl named Meilin turns into a giant red panda whenever she gets too excited in Disney and Pixar's 25th feature film Turning Red, released on DVD, Blu-ray and 4K UHD 2nd May 2022 from Walt Disney Home ... END_OF_DOCUMENT_TOKEN_TO_BE_REPLACED
Top PicksView