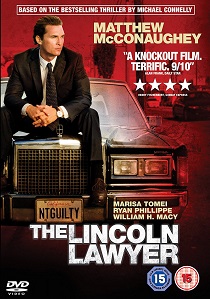 In the gripping thriller The Lincoln Lawyer, released on DVD and Blu-Ray from Entertainment in Video on 25th July 2011, Matthew McConaughey stars as Michael "Mick" Haller, a slick, charismatic Los Angeles criminal defense attorney who operates out of the back of his Lincoln Continental sedan.

Having spent most of his career defending petty criminals, Mick unexpectedly lands the case of a lifetime: defending a rich Beverly Hills playboy (Ryan Phillippe) who is accused of attempted murder. However, what initially appears to be a straightforward case with a big money pay-off swiftly develops into a deadly match between two masters of manipulation and a crisis of conscience for Haller.