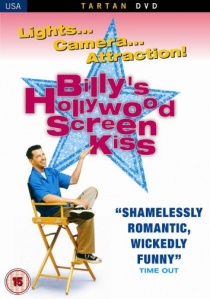 Billy is a daydreaming gay photographer who is trying to find his handsome prince. He's also determined to recreate famous screen kisses from Hollywood. When he meets handsome waiter, Gabriel, he not only believes that he's found the perfect model for his photographs but he's also met his ideal man. However, despite holding out for romance, he has to deal with rivalry for Gabriel's affection from ex-girlfriend to equally lustful friends as well as his own misplaced infatuation. But if Gabriel is willing to model for underwear ads, then Billy might still get his longed-for, happily-ever-after kiss.

Director Tommy O'Haver has created an engaging comedy for lovers of romance and 50s Hollywood, a trait explored in his Kirsten Dunst teen flick, Get Over It, and the Ewan McGregor/ Renée Zellweger rom-com Down By Love. There are affectionate tributes to Doris Day comedies, musicals and sweeping melodramas, such as the Burt Lancaster-Deborah Kerr classic From Here To Eternity. Shot it in glorious Cinemascope, it has the feel-good fun of movies such as Beautiful Thing, My Best Friend's Wedding, and Eight Women.

Billy makes a likeable hero whose unlucky-in-love experiences everyone can identify with and is played by Will and Graces's Sean Hayes. The film also features TV regulars Brad Rowe, Meredith Scott Lynn, and Carmine Giobanazzi (Detective Danny Messner from CSI: NY), with cameos from Paul Bartel and Warhol favourite, Holly Woodlawn. The good-time mood is enhanced by a soundtrack that includes Nina Simone, Petula Clark and mambo king Xavier Cugat with plenty of lip-synching drag queens.

Billy's Hollywood Screen Kiss, released by Tartan Video on 16th July 2007, is set to put a song in your heart and a smile in your step.