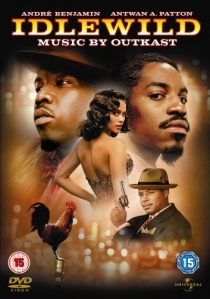 Grammy-winning OutKast members André Benjamin (André 3000) and Antwan A. Patton (Big Boi) headline this hip, sexy, and dazzling tale about greed, fame and murder. Idlewild is out to own and rent on DVD and download to own from 26th February 2007, courtesy of Universal Pictures UK.

Written and directed by Bryan Barber, director of OutKast's MTV award-winning video "Hey Ya", Idlewild bursts with extravagant production values, sizzling energy, and a blazing hot soundtrack, that blends hip-hop, blues and jazz. Set in a 1930s free-for-all unlicensed club called "The Church", piano player Percival (Benjamin) lives life by the rules, while best friend and the club's flashy lead performer Rooster (Patton) struts his stuff on the stage, until both their lives take a complicated twist. Rooster's problems multiply when he witnesses a shooting that places him and his family in the firing line of the mob while the arrival of beautiful Angel (Paula Patton) leaves a love struck Percival with the internal struggle of staying in his hometown or following his dreams of becoming a big-city song-and-dance man.

Set to OutKast's show-stopping music, Percival and Rooster's parallel journey of discovery takes them deep into the sultry south as the two friends learn the truths of deepest love, heartbreaking loss and family ties that bind them forever to a place called Idlewild.

Idlewild is a fresh, hip and an imaginative extravaganza that will dazzle and thrill audiences from beginning to end.