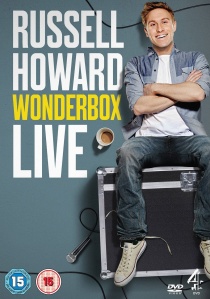 NewsStandup Comedy
News Article Go back to homepage
The popular 'Mock the Week' panellist performs live in front of his home crowd in Bristol as part of his 2014 sell-out tour as Russell Howard: Wonderbox Live is released on 24th November 2014 courtesy of Channel 4 DVD.
Russell Howard
Peter Orton
Lay-Ee Quah
Channel 4 DVD
Unknown
24/11/2014
#RussellHoward #WonderboxLive
Thank you for supporting DVD365.net when you order using the link(s) below. As an Amazon Associate we earn from qualifying purchases
Buy DVD
Information

Wonderbox, the sell-out, twice extended world tour, which sees Russell Howard perform to his biggest audience yet, is released for the first time on DVD this autumn. With over 285,000 fans at 40 shows across the UK and Ireland, including four consecutive nights at London's Royal Albert Hall, and sold-out runs in the USA, Australia and New Zealand, fans will have the opportunity to watch Russell Howard: Wonderbox Live from their living room from 24th November 2014, courtesy of Channel 4 DVD.

Recorded live at the Bristol Hippodrome, Russell returns to his home town where he started his comedy career, to perform his first live stand-up tour for three years. With tireless energy and his trademark mix of upbeat and razor-sharp comedy, Russell eagerly recounts humorous tales about his family and fondly remembers how great life was as a child, with a mix of religion, politics, Noah's Ark and Chinese take-aways thrown in for good measure. This follows on from his triple extended 2011 tour Right Here, Right Now, which included three sold out dates at London's O2 and saw Russell perform to over 240,000 fans nationwide.

Russell Howard's Good News returns for a brand new series this October, moving from BBC Three to its new home on BBC Two. It was BBC Three's best performing entertainment series and one of the most watched shows on BBC iPlayer. Russell Howard's Good News regularly trends globally on Twitter during each episode. With 3,000,000 fans on Facebook and just under one million on Twitter, alongside Lee Evans, Russell is the joint-third most searched for comedian on Google, narrowly pipped to the post by Michael McIntyre and Russell Brand.

Wonderbox Live is released on DVD on 24th November 2014 by Channel 4 DVD.

DVD
Tender and violent, terrifying and comic, The English, released on DVD 19th December 2022 from Dazzler Media., takes the arrows and bullets of its genre only to twist them into a uniquely compelling parable on gender, race, ... END_OF_DOCUMENT_TOKEN_TO_BE_REPLACED
Top PicksView