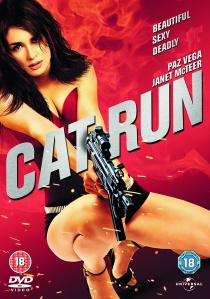 Get ready to run for your life when Cat Run is released on DVD on 23rd April 2012 from UCA, an alliance between Universal Pictures UK Ltd and Sony Pictures UK Ltd. Starring the stunning Paz Vega (Spanglish), Oscar® nominated actress Janet McTeer (The Woman in Black) and Christopher Mcdonald (Boardwalk Empire), Cat Run is a hilarious and violent action-packed caper.

From the film's opening scene full of beautiful semi-naked women, through an eye-watering interrogation, an exploding head, a literally 'legless' assistant and some suspect stains on the wall, Cat Run brings a whole new meaning to the game of 'cat and mouse'.

Directed by John Stockwell (The L Word, Blue Crush), Cat Run is a side-splitting comedy thriller. Including mind-blowing special features including a feature commentary, 'making of' featurette and deleted scenes, Cat Run is guaranteed to take your Saturday night up a gear. Crossing borders from one exotic city to another, the chase begins on 23 April 2012 when Cat Run is released on DVD from UCA, an alliance between Universal Pictures UK Ltd and Sony Pictures UK Ltd.

UHD
In Disney's Mulan, released on DVD, Blu-ray and 4K UHD 10th November 2020, a fearless young woman risks everything out of love for her family and her country to become one of the greatest warriors China has ever known. END_OF_DOCUMENT_TOKEN_TO_BE_REPLACED
Top PicksView